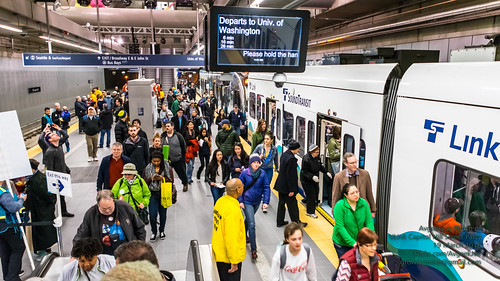 Link ridership continues to climb, with preliminary figures for May average weekday ridership in the “mid 60s” according to spokesman Bruce Gray. Anecdotally, certain twitter scolds have noted times where these loads have meant jam-packed trains. At the least, loading a bike during rush hour is uncomfortable. At worst, dozens of people are left on the platform due to lack of space.

In response, ST will increase its peak-hour baseline of 3-car trains to 6 out of 17, up from the current value of 2. On certain high-demand days, ST has already run more than two such trains. The week after UW/SCCC spring break had six. During last Saturday’s marathon, every other train had three cars.

But now six trains will be the norm, giving riders a roughly 1 in 3 chance of extra space. These are all the trains that ST adds during peak hours, so until they take the step of running longer trains during the day, this is likely all the capacity Link is going to have.