Zach informed us all last Thursday that the Seattle Department of Transportation (SDOT) plans to make only minimal transit improvements in its proposed Fairview-Eastlake-Roosevelt “high-capacity transit” (HCT) corridor.  SDOT’s proposed improvements would be limited to a few blocks of BAT lanes near downtown, queue jumps at just a few congested intersections, off-board payment, some signal priority, and electrification north of Campus Parkway.  Nearly all of the route would remain in mixed car/bus traffic.  There are no improvements to two intersections that cause major transit delays along the corridor today: Fairview/Mercer (in the northbound direction) and Eastlake/Lynn.  In short, the project would amount to a through-route and electrification of today’s Metro routes 70 and 67, with only a few functional changes.

SDOT, this is not good enough, and it’s not HCT.  Residents and workers in our burgeoning city deserve far better.  You promised to make it better before last fall’s Move Seattle vote, and you know how to make it better.

This corridor has been on the City of Seattle’s radar since the original 2011 Transit Master Plan.  Serving approximately 10,000 daily riders on today’s bus routes, the combined corridor would be one of the city’s highest-volume bus corridors, even before any growth.  Ridership on its south half has been growing fast with increasing employment in South Lake Union.  As Zach recounted, it has been proposed for streetcar service, BRT with end-to-end dedicated lanes, RapidRide, and then “RapidRide+” — all within the last five years.  In the Move Seattle levy measure, approved by city voters last November, the corridor was to be one of seven new “RapidRide+” corridors. It has been a core project in every iteration of the city’s Transit Master Plan, and there has never been any real disagreement that most of it is worthy of substantial transit investment.

So why did SDOT devise such a limited concept plan?  The corridor has many competing uses, and it appears that transit drew the shortest straw of all of them.  Right-of-way is limited throughout the corridor, and SDOT had to balance transit with competing uses: general car traffic, street parking, and bicycle traffic. Different uses were prioritized in different sections of the project; bicycles took priority along Eastlake, while car parking and general traffic remained the highest priorities along Roosevelt.  But the end result is that along nearly all of the corridor — with the sole exception of the short stretch between Republican Street and Stewart Street — transit took a back seat.

That is a decision that makes no numerical sense today, and will make even less sense in the future.  Our resident and employee population are growing fast, while available right-of-way stays the same.  Today, transit serves a large minority of trips in the corridor.  Very close to 10,000 daily riders used routes 66, 67, and 70 combined before the March restructure of bus service in conjunction with U-Link.  Preliminary indications are that ridership has risen after the restructure (as usual with restructures).  Meanwhile, SDOT traffic flow data indicates that most portions of the corridor carry 13,000 to 20,000 daily car trips.  This comparison is imperfect; not all car trips cover the entire corridor, and many duplicate other bus routes such as the 45 or 49.  But it is more than enough to establish transit’s importance.  And transit, as always in city centers with no room for more right of way, is the way to grow capacity.  There is no way to stuff more general-purpose traffic into Roosevelt or Eastlake.  The city’s ability to grow population and jobs relies in a very concrete way on transit being able to grow ridership.  Transit should have taken first priority, not last.

Campaign materials implied that “RapidRide+” HCT would be at least equivalent to today’s RapidRide lines.  All three existing RapidRide lines in Seattle feature bus-only or BAT lanes for significant portions of their length, along with a steadily increasing number of queue jumps.  They have improved speed significantly over the local bus routes they replaced as a result, especially during peak hours.  Move Seattle’s HCT projects should get at least the same treatment.  The futhre mobility of Seattleites, outside of the few Link corridors, depends on it.

My call for prioritizing transit over protected bike lanes along Eastlake deserves special discussion.  I feel some of the same conflicted emotions as Zach on the issue.  I spent about a year commuting by bike along Eastlake, often during evening rush hour, and had my share of harrowing experiences.  This is a critical bike corridor for citywide mobility, and one with longstanding safety problems.  In any other context, I’d call wholeheartedly for PBLs along the entire corridor.  But in this particular instance I don’t believe that both PBLs and proper transit priority are possible throughout, and transit priority must come first.

Assuming that a bike-friendly Eastlake would generate similar bike traffic volumes to the Fremont/Dexter corridor, the corridor would serve an average of about 3,000 riders daily, with wide seasonal variations.  That’s a more than respectable number, but pales compared to today’s transit ridership — let alone potential ridership after major service improvements.  If this corridor were to experience similar increases in passenger volumes as other RapidRide corridors have compared to their predecessors, it could serve 15,000 or more passengers daily.

The good news is that non-protected bike lanes and some transit priority would be compatible along most parts of Eastlake, and would represent a major improvement over today’s Wild West situation for Eastlake riders, who must ride either in general traffic or sometimes in a dangerous “door lane.”  Curb to curb, 49 feet of right of way are available in SDOT’s “typical” cross-section, pictured below:

In our offline discussions, other STBers have proposed a 2-way Protected Bike Lane, a pair of 10′ bus lanes, and a pair of 9′ auto lanes, and no turn lane. Such a channelization would be tight by any standard but also calm traffic considerably and incentivize fast through-traffic to use I-5, both of which complement the Vision Zero objective of protecting people on bikes while not slowing down transit. 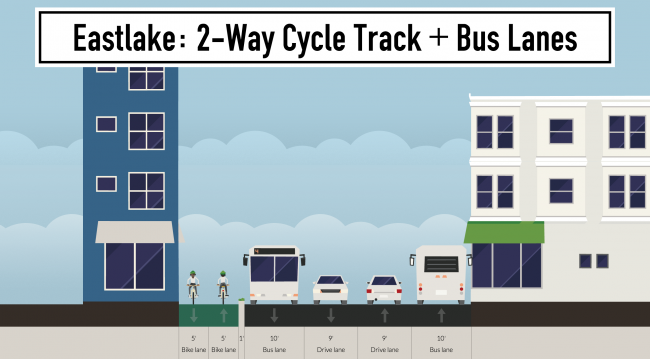 But I think the best tradeoff would involve narrowing traffic lanes to 10 feet and bike lanes to 5 feet (as SDOT does elsewhere along the corridor), narrowing the turn lane to 9 feet, and removing the buffers to allow an additional transit-only lane in one direction.  Even one additional lane could help significantly with bottlenecks, particularly approaching the chronically congested intersection of Eastlake and Lynn, and allow for queue jumps at signalized intersections.  As a bonus, narrow lanes famously slow down car traffic, and could improve pedestrian safety in the corridor.  Overall, I think this would be the best tradeoff between transit and bikes for Eastlake. 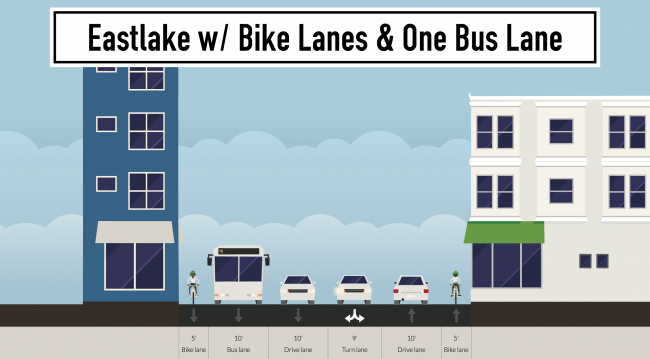