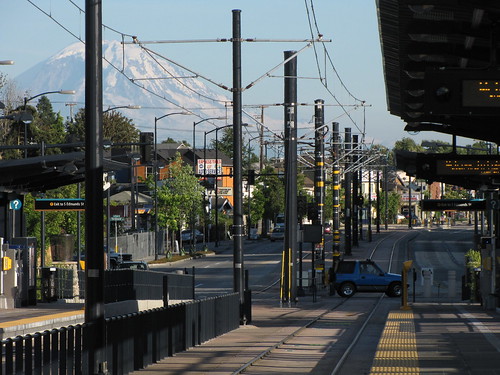 A front-page story in yesterday’s Times ($) describes a study that shows much higher property values around light rail stations. “Studies” that come from local firms trying to generate PR deserve some skepticism. Nevertheless, I think their headline writer is trying to spin this as a bad thing: “To live near light rail in Seattle, you’ll have to pay up, study shows.” Clearly, though, the obvious conclusion is that light rail is a huge improvement to neighborhoods, an improvement that people are willing to pay for.

Moreover, there is far more demand to live near light rail stations than than there are homes. A housing shortage is a product of both bad zoning and not nearly enough stations. A coherent response would both upzone and build more stations.

Somehow, the Times editorial board is opposed to the latter. Their headline is even refuted by the article’s own map, showing median homes for less than $275,000 near some stations in South King County. This is way below the King County median, the Snohomish County median, and is near the Pierce County median.

However, I have to credit the editorial staff for publishing a front page story that, to the mildly economic literate, suggests that light rail is a boon to neighborhoods. It does make you wonder about the thought process of Surrey Downs and “Save Our Trails” NIMBYs who have done everything in their power to keep away high property values and convenient transportation.