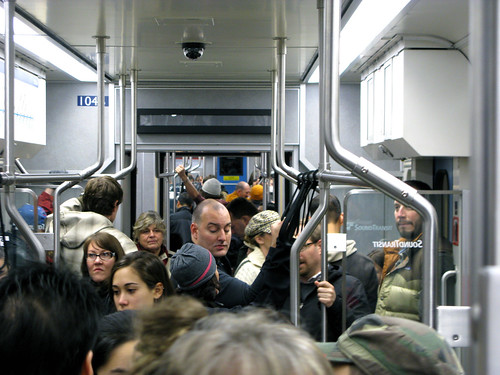 Just when you thought silly season was over for transit opponents (We should vote down ST3 because Sound Transit threw a large opening day party for U-Link!), Bryan Mistele, CEO of INRIX, a traffic-information and connected-car company based in Kirkland, has penned a ludicrous non-sequitur in the Seattle Times, arguing that the driverless car of the future will make transit obsolete ($), and, oh yeah, eliminate traffic congestion.

It was timely that the Times ran Mistele’s piece so soon after the first road fatality involving a car running on auto-pilot was announced. Live Science recently poked holes in the claims of the relative safety of auto-pilot technology:

The technology will improve. Cars will learn to optimize their following distance (but that means that they will be 4 seconds apart, which drivers today are too impatient to do, so that means less road space available). Car computers will learn to talk to each other (hopefully better than Microsoft and Apple), and software bugs will be worked out so that computers don’t “crash” while they are in the driver seat. Everyone will want one, and be able to afford them. If you believe all that, I’ve got a bridge to sell you.

But even if all those improvements are possible, the broader claims about congestion reduction and transit replacement are real whoppers, a one-two punch of Deus ex Machina that fails to show its math. CleanTechnica offers a more sanguine, and partially data-driven, analysis.

Congestion is a serious issue in developed countries, but autonomous cars are likely to be as much a part of the problem as part of the solution.

The article covers the likelihood of induced demand from autonomous vehicles, consumer attachment to private vehicles they can get in anytime, the non-linear relationship between vehicle miles and congestion, and the various cases of how autonomous cars will merely add to vehicle miles. And of course, it’s intuitively clear that removing pain points to driving – congestion’s not so bad if you can sleep through it – will only further incentivize passively occupying travel lanes.

The claim that autonomous vehicles will render fixed-route transit obsolete is particularly unfounded, with basic geometric facts providing the reality check. Yet nonetheless the argument has become a trendy political talking point, as Fortune documented back in 2014. Generously assume that “small form factor” vehicles succeed in doubling vehicle throughput capacity (a big if!). Then assume a standard vehicle occupancy rate of 1.5. Assuming these two factors, the capacity test for autonomous vehicles as congestion reducers and transit replacers is whether or not transit could reliably carry more than 3 people in the same space. That’s a laughably low bar for any urban transit agency. And for a central city like Seattle’s, with 35% of people already taking transit while using 10% of the space? Any major transfer of people from transit to small autonomous vehicles would represent a loss of capacity, not a gain.

A further problem with autonomous car technology is that it is being designed around the paradigm of maximizing efficient and safe flow of cars around each other (and talking to each other, presumably using a master protocol agreed to among all manufacturers). There have even been calls for removing traffic lights from city intersections to provide continuous flow of autonomous vehicles, to the direct detriment of people walking and biking. A team at MIT went so far as to model how autonomous cars could go around each other at intersections, and forgot to add pedestrians and bicyclists entirely, as chronicled by Citylab.

From the get-go, designers of autonomous vehicles have focused on replacing human-driven cars. Those who extend that mission to replacing bikes, buses, trains, and walking have missed an important point: Driverless cars can take up less space than human-driven cars, but they just don’t take up less space than crowds of pedestrians, bikes, buses, and certainly not grade-separated trains stuffed with hundreds of passengers. Smarter investors will sense an opportunity to apply the technology broadly to transit, and work with transit agencies to improve automatic train and bus control technology rather than antagonize these agencies based on poorly-thought-out ideological notions of forcing everyone into cars.

This is not to say that light rail will help eliminate traffic congestion. It will certainly help speed up commutes for those who ride it, but freeways are going to continue to get more clogged as population grows, people move further and further away from their jobs, and demand is induced any time road capacity is freed up, at least in an urban environment. Light rail will at least mitigate the rate at which congestion gets worse for those who continue to commute on the freeways, by moving tens of thousands of commuters off of the freeways.

Nor is this to say driverless cars won’t play a positive role in the transportation system of the future. But to say they are a reason to vote against high-capacity transit systems (or buses, or investments in bike and pedestrian infrastructure) defies simple spatial math. And besides, fully grade separated transit provides massive new capacity while leaving the street grid fully available for technological experimentation. Autonomous car investors should be grade-separated light rail’s biggest fans.