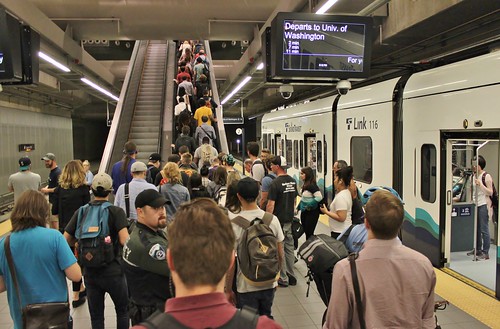 Those of you who have spent any time at UW Station, Capitol Hill Station, Mt Baker Station, Tukwila International Boulevard Station, or SeaTac Airport Station may have noticed something obvious about the station escalators. They usually involve long queues in only one direction: exiting.

You may have also noticed that station escalators sometimes shut down for maintenance for extended periods of time in the middle of the day.

There will, of course, be some ingressing crushloads, such as right after a Husky football game. In that case, Sound Transt could reverse two of the escalators some time before the game ends, and then switch them back once the crowd is gone.

I talked with an ST service supervisor about the escalator directions on opening day, and he said the escalators are reversible.

43 Replies to “The Utility of Reversing Some Station Escalators”