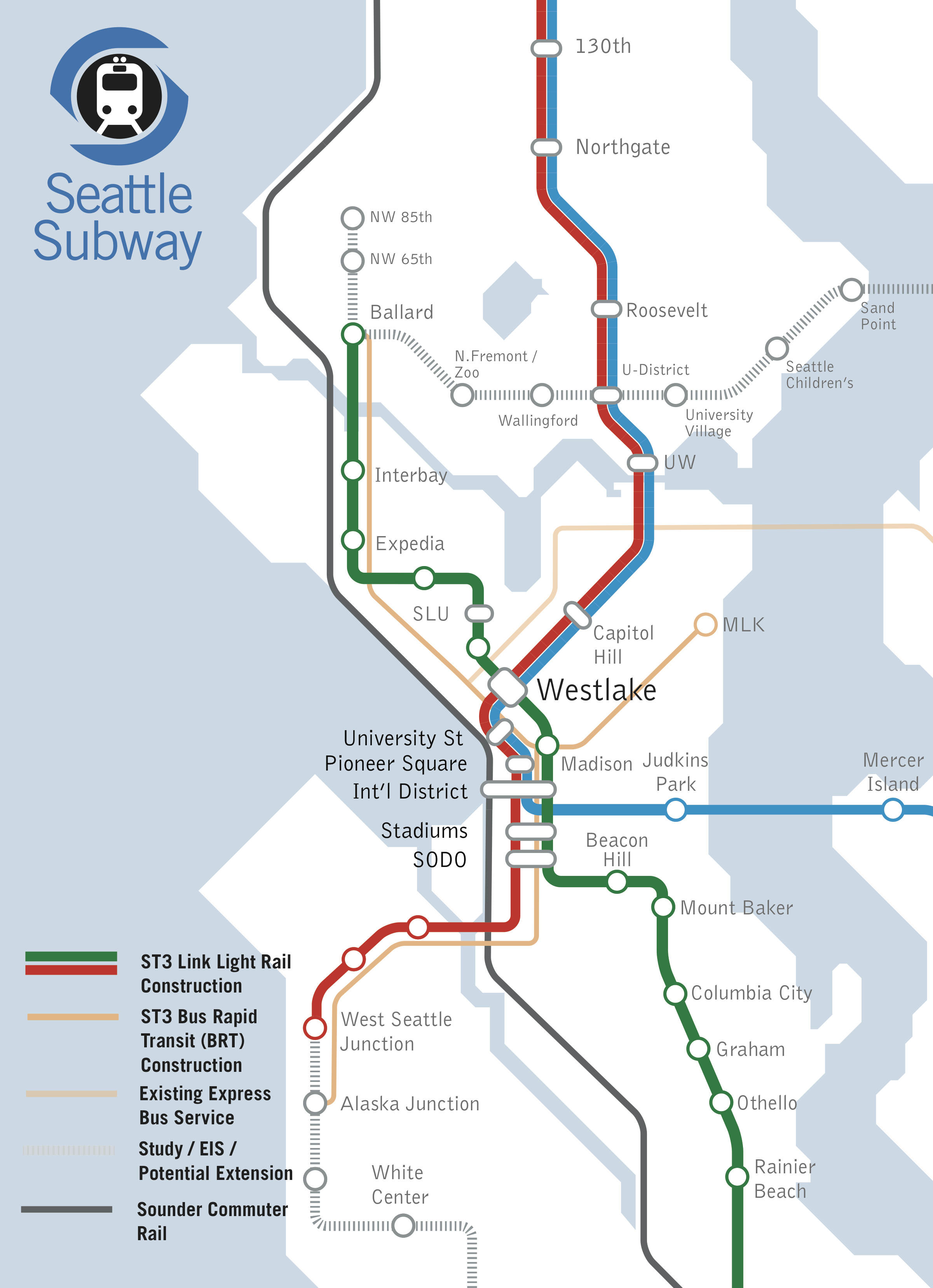 A lot of the discussion of Sound Transit 3 (ST3) – the transportation expansion package you’ll see on your November Ballot – has centered around regional mobility. ST3 will deliver a lot of value for the region, but what Seattle is getting can sometimes get lost in discussions about Everett and Tacoma.  Seattle is only paying for Seattle projects, so let’s look at what Seattle gets.

What is in a number? In the case of the $54 billion price tag for ST3, quite a lot: Inflation, federal funding, fares, and extending existing taxes that already don’t sunset for 1-2 decades. Breaking it down to new taxes in 2016 dollars for Seattle – ST3 is approximately $4 billion in Seattle, spread out over 25 years. That is still a lot of money, but ST3 brings massive value.

Ballard to Downtown
The proposed Green Line isn’t just about Ballard. It will give Queen Anne and South Lake Union the downtown connection they need. It will connect Northwest Seattle to the Rainier Valley for the first time. Compared to RapidRide, it will be three times faster, far more reliable, and more frequent. In the 35 minutes it takes RapidRide D to get from Market Street to Pioneer Square, a Green Line train will already be in Rainier Beach. Repeat this to yourself a few times: vote yes, and once it opens you’ll never get stuck in traffic again.

The Green Line will be a blockbuster for ridership, with a high-end estimate of 144,000 rides every day. That is more rides than the population of Bellevue and higher ridership than the entire 60 mile Portland MAX system. It connects growing neighborhoods where people live and work with truly world-class transit. A new downtown tunnel will connect South Lake Union, Denny Triangle, Lower Queen Anne, Madison Street, and the International District. The elevated extension to Ballard will serve up to 10,000 Expedia employees in Interbay, East Magnolia/West Queen Anne, and of course, fast-growing Ballard itself. This line will mean a 14 minute trip from Ballard to Westlake or 11 minutes from Ballard to  South Lake Union—every time.

West Seattle to Downtown
Beyond connecting the Junction, Avalon, and North Delridge, the Red Line is all about revolutionizing transit coverage and reliability across the West Seattle Peninsula. The line would give West Seattle a fast connection to Downtown (12 minutes), Capitol Hill (19 minutes), UW (23 minutes), and Northgate (30 minutes). Easy transfers at Sodo or International District would open up a world of transit trips that are inconvenient at best today: West Seattle to Ballard, SeaTac Airport, or Bellevue. The massive bus hours currently spent moving people between West Seattle and increasingly congested downtown streets could be redeployed to bring better transit service everywhere within West Seattle. For instance, voting Yes on ST3 also helps bring RapidRide to Alki, White Center, and another line to Burien. This means better coverage, frequency, reliability, and forever saying goodbye to getting stuck on the West Seattle Bridge.

Infill stations at Graham Street and 130th Street
Some of the most passionate advocacy we’ve seen during the ST3 development process came from boosters of these two stations. Graham Street Station will mean urban stop spacing through the Rainier Valley, plugging a key coverage gap. 130th Street Station will mean better bus transfers for fast growing Lake City and Bitter Lake and will be a key site for transit oriented development.

Madison BRT, West Seattle and Ballard Bus Investments ($65 million)
Move Seattle paid for part of Madison BRT but ST3 will pay a larger portion and set this project up to begin work. The Rapid Ride C/D corridor will also see major investment in the near term to improve bus speed and reliability while the rail lines are being built.

Affordable Housing Near Stations
ST3 implements a new policy for Sound Transit that requires that 80% of disposal properties (properties around stations) will be for housing and 80% of that housing must be affordable. This is a much higher requirement than the policies that preceded the Capitol Hill Station Agreement.

Funding for Local Schools
Here is a regional/Seattle upside to ST3 that has been getting minimal press: ST3 includes $518 million for local schools.

Potential for Greater Expansion
All of the gray lines on our map are funded for study but can be built as part of ST3 if additional funding becomes available. Sound Transit is counting on 11% of the package to be federally funded. Passing ST3 will put us in first position nationally for federal grants and both presidential candidates have said increased infrastructure spending is a priority.

Jobs
Investing in infrastructure projects is one of the very best ways to increase stability of the local economy and social mobility of its workers. ST3 is projected to create 223,000 jobs. This ensures  family wage jobs in the region for decades to come, building essential infrastructure to keep our economy humming through ups and downs.

What about those long timelines?
As we have covered before, seamless local collaboration by cities and avoiding political roadblocks during the environmental review (EIS) process could open the door to faster project delivery. We could see a 3-5 year reduction in timelines on lines to Ballard and West Seattle. The federal government is likely to increase transit-related grants and loans to provide Sound Transit cash flow earlier than anticipated. Check out our timeline slider chart to see what adding federal funding and speeding up the EIS could mean for projects in the region.

Though we think waiting 100 years to get started on rail to Ballard is plenty, there are some who claim putting off ST3 in hopes of a more perfect package is a good idea. Don’t be fooled. A no vote on ST3 produces two devastating outcomes for our fast-growing city:

We can’t afford to repeat history

In 1968, voters had the chance to fund a 49-mile rail system with just $24.42 per year in property taxes on an average $20,000 home. They balked, and we were left with a brittle transportation system that breaks down during every peak commute. With every year that passes, the situation gets worse, and the solutions more expensive.

Now we are faced with an opportunity to fund major improvements to our transportation network for $169/year for the average voter. Let’s not repeat history. There is only one way to bring Seattle high quality transit as fast as possible. And it all starts with a Yes on your ballot for ST3 (Regional Proposition 1) in November.

172 Replies to “Why Seattle Should Vote Yes on ST3”