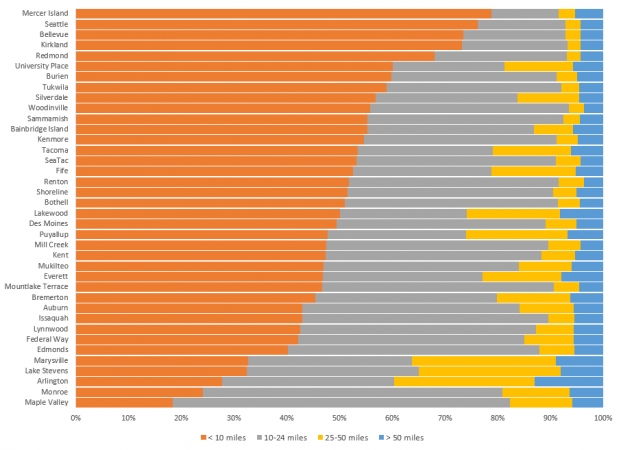 Everett and Tacoma have not yet exerted a comparable gravitational pull. Both cities are employment centers with more inward commuters than outward. But Tacoma’s workers mostly commute from further south. In Federal Way, three times as many residents commute to distant Seattle (20%) as to adjacent Tacoma (7%). Everett draws workers from southern Snohomish County, but 29% of Lynnwood residents work in Seattle vs fewer than 9% working in Everett. Almost every city between Tacoma and Everett has a commute pattern that primarily points toward Seattle rather than a local growth center. 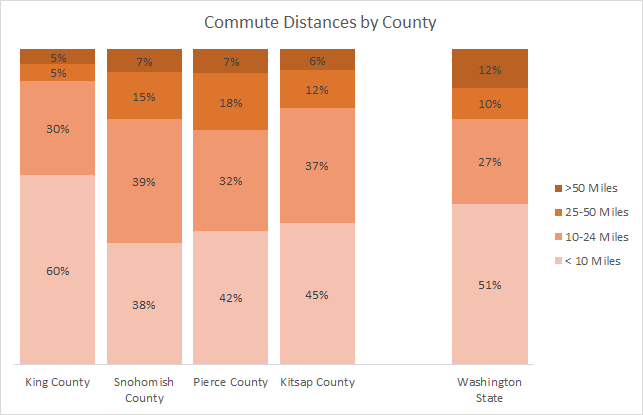 There is a jobs/housing imbalance in many cities, with more jobs in Seattle, Bellevue, and Redmond. Other cities generally have net outflows of commuters. But even cities with a balanced mix of jobs and workers have uneven commute patterns. For instance, Kirkland has a near balance of jobs and workers. But residents mostly commute into the core. Just 12% of Kirkland residents work in the city, and 58% commute to Seattle, Bellevue, and Redmond. In contrast, only 22% of jobs in Kirkland are held by commuters from those three cities. (Another 13% are Kirkland residents). Those who work in Kirkland are commuting in from less central places, and over significantly longer distances.

118 Replies to “We have traffic because we drive so far”