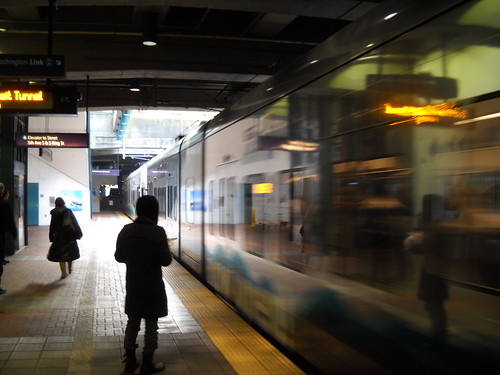 King County Metro’s spring service change begins next Saturday, March 11.  There are few major changes this time around, but quite a few incremental additions to service.  Full service change information from Metro is here; the following are a few highlights.

Routes 3 and 4 to serve SPU

The sole major routing change affects the Queen Anne portion of routes 3 and 4.  Both routes will follow a common routing in Queen Anne, serving Seattle Pacific University via 3 Ave W — a solution we have long favored.  The new routing will provide a major improvement to SPU-downtown service frequency, and will allow connections to routes 31 and 32 to Fremont and the University District.  The vestigial “tails” of both routes, on small neighborhood streets, will lose service.  The new routing will be a very short walk for the few current riders using the route 3 tail, but some riders on the route 4 tail may have to walk a few extra blocks to reach service.

Although there will be just one route north of downtown, Metro is keeping both route numbers around for now.  The decision could be revisited if Metro ever restructures away the redundant and expensive southern end of route 4, as it proposes to do by 2025 in the Metro Connects long-range plan (and also in earlier proposals).  After such a restructure, the number 3 could be used south of downtown and the number 4 north of downtown, for much improved legibility and the flexibility to decouple the two parts if warranted.

The best news in this service change is that Metro is adding a significant amount of additional service, both in the city (with some assistance from Seattle Proposition 1) and in the suburbs.  The service additions are spot additions, with few all-day frequency improvements (although we understand that some of those are coming in September).  The focus appears to be reducing overcrowding.  Many of the additions are in northeast Seattle, as Metro continues working to address pain points from the U-Link restructure.

As always, there are a few other miscellaneous changes.

Five Democratic Senators, including Bob Hasegawa (who represents parts of Renton, Tukwila, and Sodo), yesterday teamed up with all 24 Republicans to pass SSB5001, which would govern Sound Transit with an elected board. Mr. Hasegawa apparently thinks that this Republican plan is inspired by a better way to get high-quality transit, or perhaps he doesn’t care about high-quality transit. Because his new comrades are tweeting stuff like this:

END_OF_DOCUMENT_TOKEN_TO_BE_REPLACED

STB has done a deep dive into the street overhauls and bus service restructures being considered by the One Center City project. If you haven’t already done so, please Participate in the online open house, and Comment at the site. The comment form is just an open-form text box, and there are no surveys to complete.

As we wrote in our Tuesday editorial, we believe in:

We hope that you will take a few minutes to comment in favor of these principles and ideas. Comments are due by Friday. For more background, our posts on One Center City can be found here.

Since its launch a year ago, the First Hill Streetcar (FHSC) has struggled operationally. It takes a wildly variable 20-35 minutes end to end, barely besting a walking pace. Being in mixed traffic, except for a short section of 14th Avenue, renders it useless during periods of gridlock. Its frequency is poor and unreliable.

The many compromises that made Broadway what it is today (retained parking, driving/streetcar lanes, a meandering fixed rail alignment, and a cycle track) mean that the right-of-way (ROW) is fundamentally unfixable without tearing out the rails and starting over. The parking lanes that flank the travel lanes are too narrow and piecemeal to be repurposed, and removing the cycle track wouldn’t help much either.

But SDOT has a few ideas for improving the line at the margins, and they plan on implementing some of them beginning this summer. Signal improvements on Jackson Street will be the first improvements, with lengthened east-west signals and transit signal priority.

After some additional design and feasibility work, SDOT will look at adding a Business Access and Transit (BAT) lane on southbound Broadway between Pike and Marion, the only place on the FHSC corridor with surplus ROW. In this section, there is no parking in the southbound direction and the streetcar hugs the curb. This leaves a roughly 9′ median lane that currently lies empty. In a blog post last week, SDOT said that it intends to try to convert this median space into a southbound general purpose travel lane, turning the southbound streetcar lane into a BAT lane. Functionally, this means only streetcars, buses, and right turns will be permitted.

Converting the center lane to a through lane will remove left turns from Broadway to Pike and/or Union. SDOT will install dedicated right turn cycles to clear the lane of turning vehicles, which should improve flow but will marginally delay pedestrians looking to cross Pike, Union, or Madison.

Lastly, SDOT will also tinker with one of the slowest parts of the trip, the crossing of the clashing grid of Yesler, Boren, and 12th. SDOT will ban PM peak left turns and retime the signal at 12th/Yesler.

For all its flaws, 3,000-3,500 people per day are riding the FHSC, and it does represent the best way to get between Broadway, Swedish, and the Yesler Terrace now that Route 9 is peak only and Route 60 deviates to 9th Avenue. So though design constraints will keep SDOT from radical improvements, each of these changes should noticeably help get the streetcar moving a bit better. SDOT estimates travel savings of 3-4 minutes once all improvements are in place.