Beginning this coming Monday, September 25, the Sounder South Line will have two new roundtrips, bringing the total number of daily roundtrips to 13. The trips will bring Sounder frequencies down to every 20 minutes during peak hours and 40 minutes during the early afternoon peak.

The first new morning trip, a northbound departure from Lakewood, will depart at 5:01 a.m.; existing departures will be pushed out to 4:36 a.m. and 5:26 a.m. to accommodate the new trip. A new reverse peak trip will depart from Seattle at 7:55 a.m., arriving in Lakewood at 9:11 a.m. The first southbound trip to Lakewood in the afternoon will be moved from 2:35 p.m. to 3:35 p.m., with replacement bus service on Route 580 between Puyallup and Lakewood offered instead. Other departure times will also be adjusted, with the last southbound Sounder train leaving Seattle at 6:30 p.m.

In addition to the new trips, Sound Transit is rolling out new cars, featuring a new cab design. Additional capacity will be added to certain trips, including the mid-day trips added last September, with the new cars and other fleet reshuffles. Several cars that were borrowed from the North Line will be returned, reducing the number of days with two- and three- car trains at rush hour. 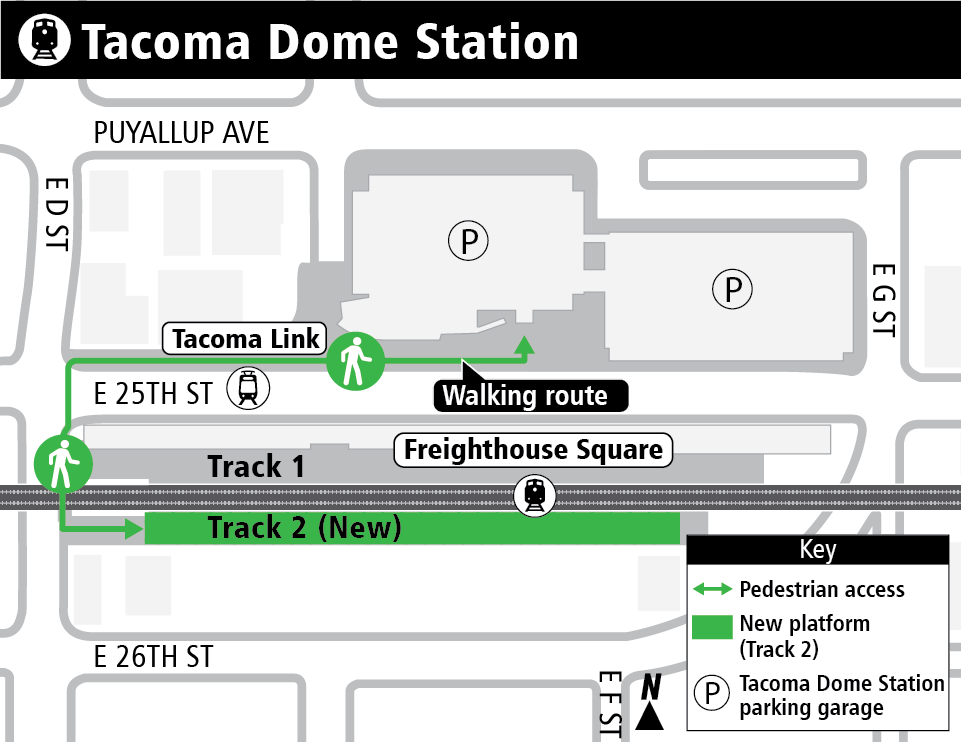 Riders at Tacoma Dome Station may need to use the new south platform, across the tracks from the existing station, built as part of the Amtrak project next door. The track can be accessed from East D Street, as seen in the map above.

The following trips will use “Track #2”, effective September 25 (all others will use Track #1, regardless of direction):