Progressing 3.5 to 5 feet a day on average, crews working on the East Link light rail tunnel have completed 700 of the 2,000 feet of tunnel that will eventually connect the future East Main and Downtown Bellevue stations under 110th Ave.

Due to the short tunnel length, approximately one-third of a mile, the tunnel is being constructed using the Sequential Excavation Method (SEM) rather than using a tunnel boring machine. As the soil is removed in small sections, pressurized concrete, known as shotcrete, is sprayed onto the tunnel’s sides. Steel lattice girders are added to give additional support as the shotcrete is drying. A waterproof layer will then be added, followed by a thicker layer of shotcrete.

A video by Sound Transit shows the tunnel excavation process in detail.

Crews have worked twenty-four hours a day, six days a week since construction began in late February. Work is expected to continue through the end of 2018.

END_OF_DOCUMENT_TOKEN_TO_BE_REPLACED 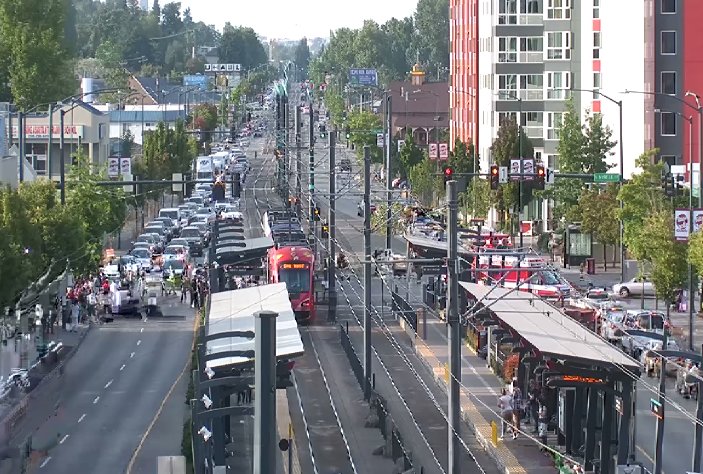 Link Light Rail has had some rough patches over the last month with a couple of major incidents occurring during peak commute times. The first was a Link-involved accident on MLK at the tail end of the Sept. 15 afternoon commute. A week later, Link was disrupted by a drive-by shooting in Columbia City that resulted in a crash near the tracks. These incidents are a timely reminder of the vulnerabilities (and dangers) of a rapid transit system that shares right-of-way with vehicle traffic. But how often is Link service disrupted? I’ll dig a bit into the data to shed some light on the statistics of Link interruptions.

END_OF_DOCUMENT_TOKEN_TO_BE_REPLACED

Metro has already lapped the field compared to its regional partners in the race for real-time data. They have long exported that data to a multitude of apps (and text services!) and posted it on signs at many of the most important bus stops. However, underlying problems with real-time data have typically limited the usefulness of any platform for that data, public or private, under certain circumstances. In particular, users at the beginning of a route who were not “in the know” were pretty likely to show up absurdly early or late for their bus.

Two weeks ago, Metro announced a fix to that problem.

To fix this problem, Metro has upgraded the underlying data system that drives the transit schedules in a project called “Stop Based Scheduling.” It goes live Saturday, Sept. 23, and it shifts the data that schedules are based on away from key intersections, using key bus stops instead, while also mapping out what buses will do when they’re not in service.

Because of this, customers may notice an improvement in the accuracy of “real time” schedule information if they ride on one of the earlier stops on a particular trip. This transition should be seamless for riders, improving the accuracy of the data Metro collects about its service, specifically around where our buses are and how they’re operating relative to their schedules.

Changes like this dramatically reduce the frustration factor. New users find that schedules often do not reflect reality, and then discover OneBusAway. Then they find that even that data, which has the illusion of accuracy, has deep problems of its own.

These problems are sometimes deceptively hard and/or expensive to solve, but Metro prioritized them and solved them. Perhaps this attitude can filter over to other agencies as well.

The International Rail Journal and El País reported this morning that SDOT will award a $50 million contract to CAF (Construcciones y Auxiliar de Ferrocarriles), a Spanish rail manufacturer, to build ten “Urbos” streetcars for the Center City Connector project. Three of the streetcars in the order will be used to replace the oldest cars on the South Lake Union line, which lack off-wire capabilities and could potentially be sold to Portland. The contract also includes testing, spare parts, and options for an additional ten streetcars if needed.

CAF will assemble the cars in their Elmira, New York factory to comply with Buy America requirements. The Urbos 3 model is a 100% low floor vehicle, unlike the current 70% low floor streetcars from Inekon, and has 34 to 38 seats in a mix of transverse and aisle-facing rows. The vehicles, like the newer generation of Inekon streetcars built for First Hill, are able to run off-wire using on-board batteries and a “super-capacitor” developed by CAF.

END_OF_DOCUMENT_TOKEN_TO_BE_REPLACED

The proposal consists of:

The fiscal note for the package was provided to the committee.

Metro is expected to bring in approximately $3 million in additional fare revenue per year as a result of the fare restructure.

The cap on human service ticket allotments will increase by $400,000 per year (and oddly, this amount is stagnant, rather than indexed to population growth or clientele growth).

Eliminating the $3 RRFP administrative fee is estimated to cost Metro $75,000 per year in forgone fees. Making the senior/disabilities version of the ORCA card available for free would bring the program more in line with the industry standard, as 16 of the other 24 smart card programs in the US also make their senior/disability cards available for free. Metro has pointed out that it costs $8 to produce each card (and closer to $40 to go through the whole process for the invasive disability card qualification process). But given the effort one has to go through to get these cards, the standard argument about charging for the card in order to avoid people treating them as disposable doesn’t seem to apply, especially when losing the card means loss of access to the fare discount.

Reducing the regular and youth card fee from $5 to $3 is estimated to cost Metro $700,000 per year in forgone card revenue.

That leaves Metro clearing a profit of roughly $1.8 million per year in net extra revenue. END_OF_DOCUMENT_TOKEN_TO_BE_REPLACED

With guest appearance of our favorite parking economist Donald Shoup.