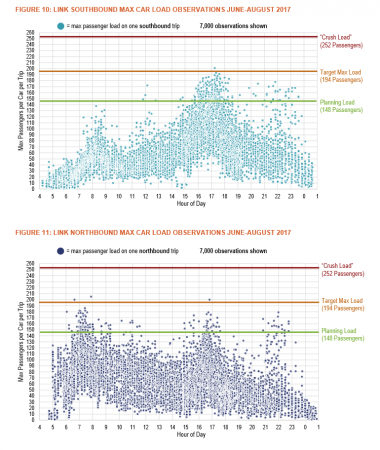 The Sound Transit Service Implementation Plan (SIP) is a goldmine of great data. Lizz has already reported on some of the big-picture stuff, but check out this graphic depicting load factors on Link.

As one who experiences Link’s load factors daily, I’m fascinated by the patterns that I can recognize. We see the two rush hour peaks, and that the most crowding occurs to and from the Rainier Valley. There are also inconsistent peaks around lunchtime and 10pm, which I assume are related to day and night games.

It’s also interesting that the practical limit appears to actually be about 200 people per car. Frequent riders will recognize the case where it is actually impossible to add riders. Given the seating layout, I don’t see how a “crush load” of 252 is feasible.

43 Replies to “Load Factors on Link”