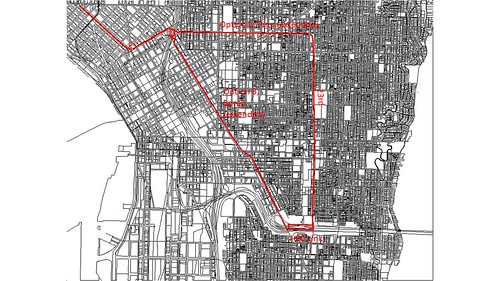 I know, I know, I know. Everyone has Monorail PTSD. Even mentioning the M word probably activates the bile duct of half of the STB readership. But consider the future slowly congealing before us. ST3 will prioritize extending the existing lines (completing the spine), then West Seattle, and finally Ballard. The Ballard line will travel via South Lake Union and thus bypass Belltown. At the same time, the the new DSTT will likely stay west of I-5 because tunneling under I-5 (twice) would be difficult, expensive, risky and circuitous. Thus, we confront a future where after a 25 year wait the two densest neighborhoods closest to downtown never get high-capacity transit services. At the same time, passage of ST3 (arguably) exhausts the sales tax bonding capacity. These areas are well suited to transit, and, generally, amenable to further density. Failure to serve these neighborhoods in one of ST’s greatest sins but it’s clear at this point that their mandate for regionalism trumps any cost/benefit analysis or efficacy.

However, the city has existing real and political infrastructure lying around that allow us to serve these areas at reasonable cost and build the dense walkable city we all want. First, we have the existing guideway, service bays and two (recently rehabbed) trainsets running for just under a mile right through Belltown. The Monorail currently terminates on top of West Lake Station which will also be the transfer point for the new Ballard line making it one of the two major rail hubs for the region. Monorails have certain advantages and disadvantages, however the, alignment proposed below utilizes its strengths and minimizes its limitations. First, monorails have smaller, lighter guideways than rail and is relatively quiet. In a post-ST3 world going elevated may be the only way to get high-capacity transit to areas not covered by ST3 and if we’re going elevated, then monorails the integrated guideway and loadbearing structure probably dominates in terms of construction cost and installation. Second, because the guideway can be precast and hoisted into place, they make it better at spanning existing infrastructure (like I-5) but also run above existing buildings. Finally, because of the rubber tires monorail can climb steeper grades to reach the heart of Capitol Hill and are relatively quiet. The major limitation of monorails are cumbersome switches that would entail some operational limitations to branching. However, this proposal is of limited ambition, where the monorail largely serves to augment link and would not require many additional switches.

Here’s a draft alignment that would connect four dense residential areas: lower Queen Ann, Belltown, First Hill and Capitol Hill with the existing the Green and Blue lines and the downtown core:

A rough map is available here:

head SE from Westlake on 5th for 2 block.

Obviously a lot of riders will be transfers and it still won’t be that long, but it’s a lot of connectivity for 1.25 miles of guideway and three new stations. It would require exactly one taking for the eastern terminus. Everything else is existing infrastructure or public property. It would leverage a lot of otherwise stranded assets.

It would reach 4 distinct neighborhoods, two of which are skipped my heavy-capacity transit altogether. It would connect to existing and planned transit investments including Link and the streetcar at Westlake and Madison BRT on the east end. The Las Vegas Monorail cost 160M per mile for an entirely new system. Even assuming some cost for inflation and the Seattle Way (TM) wouldn’t 200M be in the ballpark? That just happens to be the amount that ULink came in under budget. For effectively 4 new stations! And not just any stations, but some of the most transit friendly and thus productive in the city!

If this initial segment proves successful it could also be expanded incrementally,  running further east to 23rd and then south on 23rd to the I-90 Link station. It could also be extended through the Center up to the base of Queen Anne. When we look at effective transit systems in the world, they tend not to be ones that reach deep into the suburbs. Instead they offer a dense grid/lattice/network of lines in a relatively small area. Paris or Barcelona are probably the best examples. Extending the existing monorail is an affordable way to build out that grid within the urban core.