In advance of the March 13 viaduct referendum, the P-I has a nice roundup of various local leaders’ opinions. A couple of things stand out.

First, Council President Nick Licata, who’s pro-rebuild, focuses on the affordability of a new elevated structure. With all due respect to Mr. Licata, a half-billion dollars amortized over a century is not a lot of money. Better to do it once and do it right.

Second, Mayor Nickels frames his position as anti-rebuild and not pro-tunnel:

In other words, he’s setting himself up to save face if the tunnel vote fails: he can still claim victory if the rebuild also fails. The question is whether he’s subtly pivoting to the so-callled surface-transit alternative, or whether he just wants to go back to Olympia with a big fat “NO” from Seattleites. We’ll find out after the 13th.

I drove by the Tukwla link station on the way to the airport. Much progress. It’s this week’s photo of the week at Sound Transit: I’d been wondering why Westlake Ave has been closed for so long between Broad and Mercer. It seems like much too much of a mess to be Streetcar-related. Turns out it’s an effort to clean up a 25-year-old oil spill.

The trail would be designed as a “dual-use facility” that could accommodate a high-capacity passenger rail line sometime in the future, said one of the architects of the deal, County Executive Ron Sims.

If a final deal is reached in the coming months, the Port would pay $103 million for the rail line, then swap it with King County in exchange for county-owed Boeing Field.

The Port would also give the county $66 million to build a biking and hiking trail south of the Snohomish County line. Freight trains would continue to run between Woodinville and Snohomish.

So the Port is paying $169 million for an entire airport, or roughly one-tenth of the cost to add a third runway at Sea-Tac. Not a bad deal! The county gets to divest itself from the airport business, which makes sense, and it gets to preserve the right-of-way for transit use down the road.

Operations [at the airport] would not change at least until 2022, when SeaTac Airport, which is owned by the port, is expected to reach capacity, Sims said.

That’s when the pedal hits the metal. Remember that Sims was able to halt Southwest’s proposal to build a passenger terminal at Boeing Field in 2005. The Port objected to Southwest’s proposal, mainly because Alaska Air would have moved to match it, and the resulting decrease in gate fees at Sea-Tac would have hurt the Port’s funding for the afore-mentioned third runway.

Now, with the Port in control of Boeing Field’s destiny, it will be able to dole out passenger service as it sees fit. And, wouldn’t you know it, 2022 is just about the time Sea-Tac, third runway and all, is expected to reach capacity. Georgetown residents probably ought to get ready to fight again. 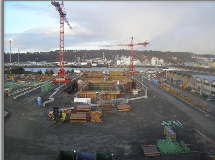 WSDOT has a surprisingly well-made construction cam documenting the rebuilding of the Hood Canal Bridge.

Most of these government sites are pretty poorly designed, but this one’s got a pretty slick interface. It’s fun. Too bad the photos aren’t very dramatic. Maybe in a few months…

The Seattle PI today endorses a NO-NO vote on the viaduct:

The message behind this no-no vote might be lost on Gregoire, Nickels and Chopp, who each appear immovable on the issue, and have abdicated their duty to lead. We’d like to send them back to the table to study carefully, and without prejudice, all possibilities, including a surface-plus-transit option. In the meantime, the state is responsible for safety on the current viaduct. Perhaps it ought to retrofit the thing while decisions are being made so that we don’t risk it crumbling over our heads or beneath our wheels.

Instead of spending our limited transportation tax dollars on more concrete for cars, we should be doing what cities across the country, from Milwaukee, Wisconsin, to San Francisco, to Portland, Oregon, to Chattanooga, Tennessee, are doing, with universally positive results: tear the viaduct down, implement all the surface-street improvements we’re going to be doing anyway during the 9 to 12 years the viaduct will be closed for construction, and see if we can get by without it permanently.

And that seems to be the nut of it: if we have to close the corridor for a decade anyway, we may as well close it for a few years and see what happens.

Brian Miller, writing on the Weekly‘s blog, notes that the downtown condo boom means that Seattle’s rich will be able to avoid traffic, while the poor will be pushed out to the auto-dependent suburbs:

So those affluent enough to trade addresses from Mercer Island or the Sammamish Plateau or even Laurelhurst would be able to avoid paralyzing, permanent gridlock. Horrendous traffic jams would be something to enjoy, even laugh at, while looking out the windows of Smith Tower, martini glass in hand.

…a pattern emerges: Commuting is for the poor, for the powerless, for those dispossessed from Seattle and its politics.

In other words, in the not-too-distant future, the rich will walk to work every day while the folks who do their laundry will be bused in from Renton and Federal Way, a grueling two-hour bus trip.

He’s exactly right. But it’s a pattern common to all of America’s gentrifying cities, from Philly to San Francisco, not just Seattle. And it has little to do with the Viaduct. Overall, shrinking commutes are a good thing. If a downtown apartment becomes a symbol of “the good life” in America (as opposed to a lawn and a two-car garage), that’s even better, because it will increase demand for density.

Nonetheless, it’s a real problem for the working-class and poor in the city. There are really only two ways to mitigate its effects:

(1) Low-income housing in the city, which can never solve all of our problems, and doesn’t address the core issue: Why would a working-class family want to live in a downtown where the only grocery store is an unaffordable Whole Foods?

(2) Transit, transit, transit. A true regional rapid transit system will allow people to spread out and avoid a traffic-clogged commute every morning.

It should be clear to anyone who reads this blog that I’m a fan of the latter solution. But the poor alone don’t have the muscle to advocate for rapid-transit. So the question, to bring it back to the meat of Miller’s argument, is whether or not the city’s elites, the ones living in the new Smith tower and working in nearby city hall, will advocate for more rapid transit, or whether they’ll just hole up in their downtown condos and take a rooftop helicopter to the airport when they need to. The latter is the true apocalypse scenario Miller’s hinting at.

Given how spread out the region’s employment centers are (Redmond, Bellevue, Downtown, Renton…), it’s almost impossible to spend your entire career living and working within walking distance. So I have to think that it’s in everyone’s interest, even if you live downtown, to build a true regional transit system. Because even if you never ride the bus, you still benefit from its existence, in the form of decreased traffic on the highways. With that in mind, I think the trend of wealth moving downtown could actually be a boon for the poor, because it will increase demand for transportation alternatives. And that’s a good thing for everyone in the long run.

On March 13, Seattle voters (well, all 5 of them who mail in ballots) will face two questions:

You can vote yes on one, both, or neither. The Times breaks down the possible results here. The most likely option seems to be no/no, which is what the folks at The Stranger have been hawking.

The second most likely option is no/yes, which would almost certainly bring the debate to an end and result in an elevated rebuild. Even the Mayor would have to concede that he’s lost this one. If you gamble on a referendum, you have to be willing to accept the results.

If you were uncertain about just how opinionated everyone’s become about the Viaduct, look no further than the Seattle P-I’s “Popular Soundoffs,” where no less then 3 of the top 5 most commented-upon articles are on the Viaduct: 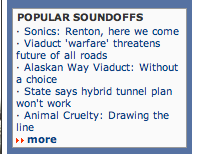 We’re not wanting for opinions on this particular topic.

The “Surface/Transit” option for replacing the viaduct seems to be picking up steam, according to the Times:

The state DOT says it is not studying surface proposals.

“I would say emphatically no,” said David Dye, the agency’s urban-corridors administrator. “We’re taking our lead from the statements of legislative leadership and the governor’s office. We’re focusing on working on the elevated design.”

But DOT itself has temporarily reassigned staffer David Hopkins, who was helping craft a regional highway package, to gather information about surface and transit ideas that Sims and King County transportation staffers are developing.

In other words, WSDOT is gearing up for the fight. Or, as transportation secretary Doug MacDonald says, “The surface discussion is coming like a freight train.”

Surface/Transit is just an idea at this point. Like “Bus Rapid Transit,” (BRT) it means different things to different people. The graphic that accompanies the Times article provides some detail as to what it might include, such as keeping 3rd Avenue bus-only through downtown.

The most innovative part of the plan, though, is to connect Highway 99 with I-5 interchanges at several points downtown. The problem now is that freight trucks coming off the waterfront have to take the Viaduct north through downtown. Their first real chance to switch over to I-5 (to reach destinations North and East of Seattle) is at Mercer Street. If you provide the trucks with the opportunity to hop over to I-5 South of Downtown, you alleviate that need.