In a surprise move earlier this month, King County officials decided to restart the process that could eventually construct hundreds of affordable housing units within walking distance of the Northgate Station.

Why King County cancelled the RFP

Metro, which owns the parcel that will eventually become the site of the TOD project, cancelled a request for proposals on June 5. Two companies, Lake Union Partners and Stellar Holdings, answered the original RFP. The developers did not respond to requests for comment.

In a notice sent to the bidders, and in subsequent public comments, county officials explained that they cancelled the RFP to incorporate new and anticipated changes to laws governing the RFP process.

A new state law, which came into effect June 7, allows local governments to give surplus property to developers for free, as long as the property will be used to house families who earn 80 percent or less of the locally adjusted area median income.

Meanwhile, the Seattle City Council is considering whether to upzone the Northgate TOD plot. As Bruce pointed out, an upzone could make Northgate a major urban center.

Diane Carlson, Metro’s Director of Capital Projects, was involved in the decision to cancel the initial RFP. Carlson says that the county wants to take advantage of the statutory changes because of the site’s potential.

“We’ve given [ourselves] an opportunity to potentially create more housing on that site, and we want to take advantage of that,” Carlson says.

END_OF_DOCUMENT_TOKEN_TO_BE_REPLACED 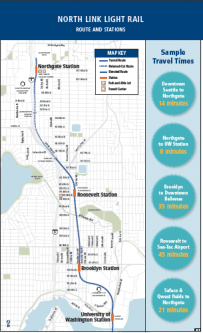 Both Roosevelt and Brooklyn Stations have reached the 30% design stage and will have a new round of public meetings. Sound Transit will hold an open house for Roosevelt on May 26th, 6 pm at the Ravenna-Eckstein Community Center. The 30% design Open House for Brooklyn Station will occur June 9th, 6pm, at the Hotel Deca. We reported on the last Brooklyn meeting (and the followup) earlier this year.

The alignment consists of 3.3 miles of twin bored tunnels and one mile of retained cut/fill and elevated tracks. The cut/fill section will be very similar to the segment that currently parallels I-5. Previously the alignment was to transition from below to at grade at NE 75th, however last year Sound Transit revised this moving it north to NE 85th which will save approximately $10 million. The retained cut/fill section will parallel I-5 and will become elevated at NE 95th and will continue to the elevated station to be constructed just west of the Northgate Transit Center.

Lots of diagrams and details below the jump.

END_OF_DOCUMENT_TOKEN_TO_BE_REPLACED

According to Mai Ling of Maple Leaf Life, Sound Transit unveiled an alternative to the North Link light rail line extension at the recent public meeting at Roosevelt High School:

University Link Deputy Project Director Ron Endlich introduced a new proposal to keep the light rail line underneath Interstate 5 farther than the current proposal, which has the trains beginning their rise to freeway level starting at Northeast 75th Street. Under the new proposal, they would rise above ground en route to the Northgate station starting at Northeast 85th Street…

“This will improve our overall construction schedule,” Endlich said. “We believe it will also have a lower net cost to taxpayers under this approach.”… According to a flier from the meeting, the proposal is expected to save $5 million to $10 million.

From the press release:

Sound Transit is hosting a meeting to kick off final design of the North Link light rail project. North Link is a 4.3-mile extension to the regional light rail system with stations at Brooklyn (University District), Roosevelt and Northgate.

At the meeting you will:

Your participation is important.

To request accommodations for persons with disabilities, call 1-800-201-4900 / TTY Relay: 711 or e-mail accessibility@soundtransit.org.