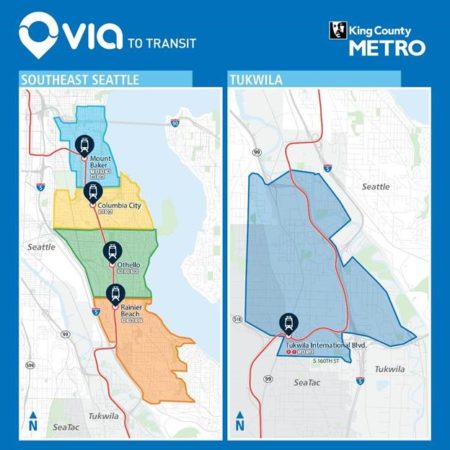 Express an interest in transit at just about any cocktail party in the Rainier Valley, and you’ll hear how what Sound Transit really needs to do is provide a shuttle to get people to the stations. Inevitably, people are proposing a solution to their specific problem without much awareness of scale or efficiency. Much like park-and-ride spaces, shuttles are probably more effective at allowing people to conceive a way to use light rail than actually providing that access at scale. On the other hand, Metro and ST seem to have worked their way into a contract that projects a pretty good yield from what some might call coverage service.

The Federal Transit Administration is willing to give shuttles a shot, possibly anticipating that autonomous vehicles will eventually transform the economics. Metro and Sound Transit won $350,000 from FTA in a research project combined with LA Metro. This sum, combined with $100,000 each from Metro and ST, would have funded a peak-only shuttle at a couple of Seattle stations and Tukwila International Blvd, according to Project Manager Casey Gifford of Metro.

Enter Seattle, with Transportation Benefit District funds that Metro doesn’t have the capacity to serve with more buses. Its $2.7m contribution dramatically expanded the concept to include four Seattle stations and service over the full span of Link operations. Tukwila, which didn’t top it up, is only available from 6-9am and 3:30-6:30pm.

For the next 12 months or so, riders traveling between a Link Station and the areas shown above can use an app or phone number to summon a minivan operated by Via. They can pay for the ride just like any Metro bus, except for cash: an ORCA that fully transfers to Link, or a Transit GO ticket that doesn’t. Although this payment scheme will shift some more ORCA revenue from ST to Metro, only the small amount of Transit GO tickets (and additional volume) would put more fare revenue into the system as a whole.