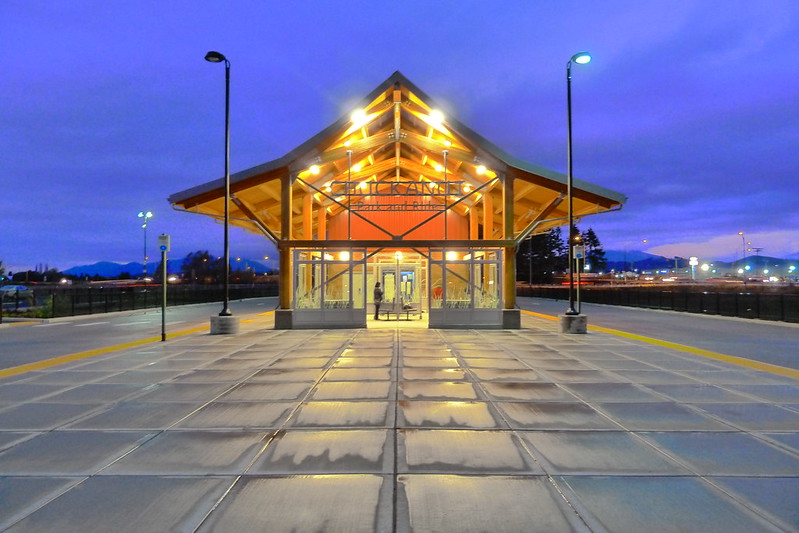 Recently Bruce Nourish wrote a fine piece on Spokane’s transit woes.  Woes perpetuated by the moneyed interests of that fine city based on prejudicial myths of transit users.

I see some similarities in my Skagit County – we too have a ruling elite to the point one family is about to marry massive economic power with sizable political power, we too have all the mainstream news owned by another family with declining resources for muckraking government, and we used to have a transit hub in the downtown of Burlington at the Cascade Mall which was good for commerce.  Now we have courtesy of the Washington Department of Transportation a Park & Ride at the north of Burlington for a transit hub linking Skagit Transit Routes 300 between Sedro-Woolley & east Burlington, 80X to Bellingham, 90X to Everett and 208 to Burlington & Mount Vernon shopping. See an aerial view below:

Granted, the Park & Ride is convenient to drop folks off, to pick up buses and next to Interstate 5 with 369 parking slots.  But the previous hub was the Cascade Mall with vast amounts of parking plus lighting & security cameras that did not cost Washington State taxpayers $11,852,000.

Now… there is no restroom with all the sanitary issues that entails, there are few places to shop within a walking distance, and there is no commons area that is warm in the winter and cool in the summer – all of which the Cascade Mall provided the public.  There is only now apathy, a lit bus shelter, video cameras, and 369 parking slots.  There is only each Skagit Transit user’s silence to blame – don’t let this happen to you.

To invigorate any effort to be proactive perhaps consider the reply to my recent comments into the Skagit Transit 6-year Plan asking for a restroom and a temperature-controlled commons area: “There are no plans to add facilities to existing park and rides and no change will be made to the 6-year plan to address restroom facilities. … Bathroom facilities at un-staffed park and rides are commonly vandalized and can even become a safety and security risk. The high rate of vandalism and associated cost makes the provision of restroom facilities at the park and rides prohibitively expensive.”  I spoke up too late, not while this facility was in the public planning stages where proposing a public restroom and the recruiting a Starbucks franchise to the Chuckanut Park & Ride would have been so immensely helpful.  The nearest espresso stand is instead across a very busy boulevard with no public restroom or place to stay warm.

Put bluntly as so many transit users – including yours truly – were apathetic during the planning process for this $11.8 million facility; transit planning travesties like this occur.  For too long, moneyed interests and entrenched bureaucrats in cushy jobs have taken advantage of transit users’ apathetic unwillingness to speak up and be treated like customers.  Only when we transit users band together and reply as proud customers of transit will we make things right as in business: the customer is almost always right.

15 Replies to “North by Northwest 05: The Price of Apathy, Skagit Edition”