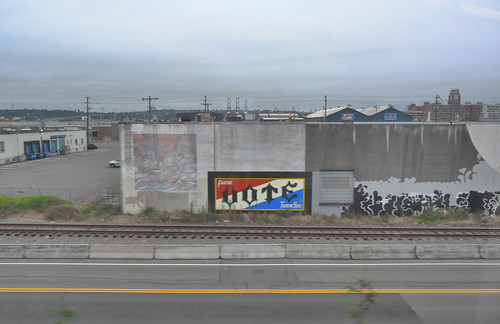 [Off topic with respect to transit]

Congressional District 2, Rick Larsen (D): Congressman Rick Larsen is a reliable pro-transit voice, having been there to get our fair share of federal funding for Washington State Ferries, been there in defending our transit infrastructure and even been there in helping Community Transit’s Swift Bus Rapid Transit get started.  His opponent is a class act through and through but sadly the US House of Representatives is a seniority club – not a meritocracy.  Personally I hope B.J. Guillot – although an excellent debater is lacking a position on transit – will get the name recognition from his efforts and run again when Representative Larsen retires.

Congressional District 3, Jaime Herrera Beutler (R): I think frankly the last thing we transit advocates need is another transportation boondoggle to deal with in our state that would have been on par with Bertha, been too low for Columbia River barge traffic and already taken money away from genuinely pressing transit goals.  Congresswoman Herrera Beutler helped pressure if not lead the way in slaying the CRC boondoggle for now and has earned one more term.  For helping impugn the monstrosity that was the Columbia River Crossing project while her opponent Bob Dingethal publicly supports the Columbia River Crossing I-5 Bridge Replacement Project and for being a Republican, AvgeekJoe endorsement for again one more term.

Washington State Senate, District 21, Marko Liias (D): Considering his opponent didn’t get back to me to clarify “Use Public/Private Partnerships to fund transportation infrastructure; end inefficient public transit monopolies by allowing private companies to bid for services?”, that increases fears this is about more than having a private operator of public transit systems.  Furthermore Liias will be “championing ST3”, “voting for more state and local funding” for transit and fight for light rail to service Paine Field.  His opponent is awkwardly silent on all of those.  Hence the AvgeekJoe endorsement for leadership.

Washington State Representative, District 10, Incumbents Norma Smith (R) and Dave Hayes (R): Both of whom are strong transit supporters in a House Republican Caucus with few transit supporters of any kind.  Both of ’em are bringing the heat to hold Island Transit accountable and keep Northwest Washington State interconnected.  With Dave Hayes’ opponent saying on his webpage, he “is intimidated by King County and other large metropolitan areas and will fight for fair and equitable transportation funding” the last thing we need are more wimps in politics.  I’m going to stop there instead of go into Zone 5 Afterburner.

Washington State Representative, District 39, Position Two, Charles Jensen (D): Being his opponent in my home legislative district is on the theological far right, not a transit advocate by any stretch of the imagination and perhaps anti-anything-government in a quest to be the next Val Stevens, enough said.  Better to stop folks like that from getting too much seniority if we want public services of any kind.

Island County Commissioner, Rick Hannold (R): In this race crucial for the future of Whidbey Island are two candidates.  One of whom is backtracking from previous anti-Navy rhetoric which could endanger Whidbey’s economy and lacks a position on Island Transit hiding behind a desire to wait for the audit & to demand more funding – easy cop outs that don’t embody leadership.  Her insistence structural change is unnecessary to the Whidbey News-Times also discredits her as a credible leader in Island Transit’s moment of maximum crisis.  Alternatively her Navy veteran opponent Rick Hannold wrote out a thoughtful, businesslike position on rescuing Island Transit in long form and I hope his enthusiasm for a transit fare will dampen after Island Transit does a study into charging fares.  Unless, that is, Island Transit is truly nearing the brink…

Personally I hope you’re pleasantly surprised I didn’t back only Republicans… also this is as far as my endorsement list goes.  Feel free to ask for more details in the comments.

10 Replies to “AvgeekJoe Endorsements For the 2014 Election…”