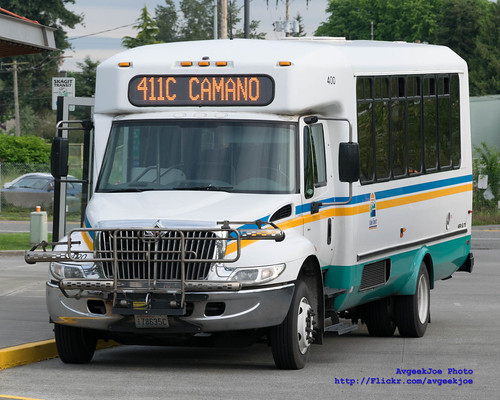 My recent photo of an Island Transit 411C Camano Bus

Full disclosure: The below letter to the editor by me ran in the Stanwood-Camano News today.

Camano should switch to Community Transit

Island Transit is removing its county connector services from Whidbey to Skagit.

Perhaps the time is right for Camano Island to change to Community Transit as your transit provider.

At least Community Transit’s finances are in great shape. has good public communications and is about to seek a three-tenths of 1 percent tax increase to dramatically increase service. Can you say any of those things about Island Transit?

Just something to debate – namely changing transit taxing districts to get a better provider.

Figured some of you in the transit advocate community would want to discuss this.  Island County Commissioner Rick Hannold also told the Stanwood-Camano News in part:

The board is not sure how long the routes will be cut. Hannold said they are investigating the initiation of a fare system that would help to alleviate the burden of the 411 routes’ additional expense.
“I’ve been pushing for a fare system since the get-go,” Hannold said. “Riders need to have a stake in this; it doesn’t come for free.”
A fare system, he said, would be helpful in many ways.
For one, the House and the Senate have approved funding for the Everett connector, Hannold said, though it is awaiting the governor’s signature. To benefit, though, Island Transit is required to include fare boxes in each of their buses.
Additionally, if fare boxes are installed, Island Transit can apply for Medicaid reimbursement for paratransit expenses –a special service for disabled individuals not accommodated by the regular bus service.
Paratransit costs Island Transit approximately $1.5 million per year.
In April alone, Hannold said, the cost for paratransit services was $70,000, while Island Transit spent $180,000 on all other services combined.
“It’s costing us so much, and we’re required by law to provide it,” he said. If they could alleviate some of the cost associated with that service, Hannold thinks money could be redirected toward other things, which may include reintroducing the 411 routes down the road – a service that has cost them around $500,000 over the past six months.
“We just don’t have it,” Hannold said.

Figure this will help fuel the debate that should have happened, like oh, last November.  I even had inside information on 2 July of 2014 this was a distinct possibility.  Yet no action until too late… the blame falls on both Skagit Transit & Island Transit for not being proactive with contingency planning for this day.

4 Replies to “North by Northwest View 19: Time for Camano Island to Pivot to Community Transit?”