Zach’s December 5th post looking at a ST3 option to split the Link spine not only shows clever thinking on Sound Transit’s behalf, it also of course raises new routing possibilities worth exploring. This post examines the possibility this presents of an additional line from Ballard / NW Seattle to Redmond, running on Green Line tracks through the International District Station (IDS), then transferring to the Blue Line routing, shown as a potential Orange Line below: 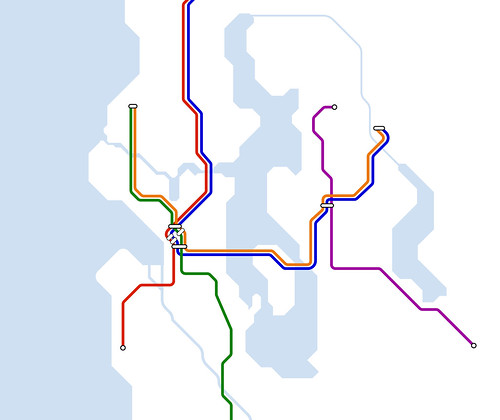 To be sure, running a line with this configuration would add further complications to the already challenging routing interchanges south of IDS, but the advantages could easily be worth it, and far outweigh the costs of building a second Lake Washington crossing. Furthermore, such a line would help balance loads between the two downtown tunnels, increase service frequency across the lake, better connect key destinations, and prevent choke points and constricted headways through downtown.

While there are potential issues, including the technical feasibility of running twice the number of trains on the I-90 floating bridge spans, and the connections between lines south of the IDS, below are five advantages that make such a line worth careful consideration:

Prime candidate for frequent headways. Eastside / Downtown Seattle is among the most important transit corridors in our region, with bi-directional peak commutes, important cultural facilities and events boosting non-peak travel, and severely constricted choke points. Short of Northgate to Downtown, the Eastside is perhaps the second most important travel corridor in the state, and should be given serious consideration for our most frequent Link headways. While this demand could be addressed with a second Lake Washington crossing, potentially increasing options for travelers, doing so would mean splitting service frequency over two routes for all stations where any such lines don’t overlap. Running an Orange Line as outlined above would make travel twice as frequent for the entirety of East Link and Ballard / NW Seattle, including SLU.

Would make greater use of planned infrastructure. Running an extra line from Ballard to the Eastside via a new DSTT and the already planned East Link tracks would dramatically increase service without the added expense of a new Lake Washington crossing, new tracks on the Eastside, or yet another DSTT. The new DSTT would be better utilized by having twice the frequency and increasing the area covered without forcing a transfer at IDS or Westlake.

While the cross-lake corridor could be served by adding a route that diverts south or southwest once arriving in Seattle, instead of to Ballard, this would require the majority of riders to transfer to continue on to Downtown / SLU. SLU / Ballard is the most logical and needed routing for an additional line running on the East Link corridor.

Requires the least amount of new infrastructure. While there are many ways to meet future cross-lake travel demands, the only way to do so without requiring massive new infrastructure investments is to run a second line along East Link routing.

Adds capacity without constricting headways. Improving headways on East Link without running a new line through the proposed new DSTT would run into challenges with increased competition for capacity in the existing DSTT, meaning reduced headways for the lines already planned for this corridor. By routing increased East Link frequency through the second DSTT, currently planned headways would be preserved, resulting in no increased choke points or reduced service to points north or to West Seattle.

Connects key tech hubs. As the two primary tech hubs in the state, SLU and the Eastside are becoming increasingly linked, as seen by Expedia’s decision to move to Interbay. As our transportation infrastructure grows, and workers migrate between companies but don’t necessarily relocate their families, it isn’t unreasonable to expect Ballard – SLU – Bellevue – Redmond to become one of our major commuting corridors. Without such a line, these commuters will end up placing heavier loads on the planned lines (Red and Blue) running through the existing DSTT, and make transfers at Westlake and the IDS much more common than they need be. Routing a new Orange Line such as this would help balance these loads across the two downtown tunnels, and make for more seamless travel at some of our most critical and busiest stations.

14 Replies to “Splitting the Spine: Ballard to Redmond option”