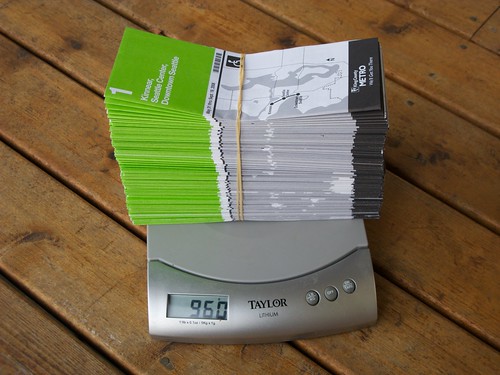 Metro creates PDFs for their flyers but they’re not posted on their web site. An e-mail to Metro’s customer service will get them individually so I made a public records request for all available PDFs available for Metro-operated routes. My request only asked for routes 1 through 373, excluding any custom bus, school bus, or DART routes, but Metro also provided the Group Health and DART routes. The Spring 2015 schedule flyers are now posted here. The flyers were given to me in five larger files so I split them up into individual ones for easier downloading. There is one page missing, for the 150/164/168/169 combo flyer, and I’ve asked for it to be resent. A single file of all routes provided to me is available [PDF], as are the five files sent to me by Metro. If a route is combined on the schedule flyer, like routes 2 and 13, or 31 and 32, there is only one file for them and it is named after the combination (for example, “Routes 2 and 13.pdf”).

As part of the request, I asked if Metro could post these files on their own web site but that answer is still pending. Update: Sound Transit got back to me and pointed out that their Ride the Wave PDF is in an obvious spot, on the right-hand column of the Schedules page. Once there, the latest book [PDF] can be found.

The February, 2015 service change wasn’t expected to be all that exciting since June and September are when the big Prop 1 additions hit the streets. Western Central District residents, however, will see long-term reroutes on three major routes through the area beginning in early April. Metro is making these in conjunction with the 23rd Ave reconstruction being done by SDOT. The reroutes are expected to be in place from early April until approximately December, construction schedule permitting. As part of the street rebuild, 23rd Ave will generally be southbound only in the construction area; northbound traffic, including buses, will travel on Martin Luther King Jr Way. This will be the beginning of reroutes through the area. According to SDOT, these reroutes correspond to phase A of construction; phases B (E Cherry to E Union) and C (E Union to E John) are scheduled for 2016.

Since Metro doesn’t have maps published on its service change alert, I made some to show the changes.

END_OF_DOCUMENT_TOKEN_TO_BE_REPLACED

Most people think of Seattle as a world class, major city. Major cities have 24-hour transit service, as should Seattle. There is limited overnight service, with the Owl routes (82, 83, 84) being understandably derided because they are the most confusing. With the new hours from Proposition 1—approximately 230,000 annual service hours are left after the June improvements are implemented—we have a chance to accomplish this for the people who keep odd hours. My bias for evening and night trips is showing because I’m one of those people; this post is actually being submitted at around 4am.

As Mike Orr points out, transit use increases when it can cover more trips and more types of trips. Right now, our transit system is pretty good at covering regular commuting hours and trips taken while the sun is usually up. Service drops dramatically in most corridors after 7pm and especially late night. This is also the first type of service to take a hit when cuts are proposed since the “bang for the buck” in the reclaimed service hours is quite high when shifted to daytime service.

However, if we are to have “the best bus service we’ve ever had in Seattle,” ($) night service should be one of the first things to come back and be enhanced. Lots of workers are employed during these odd hours and we can accomplish a lot of trip diversions by giving them the tools to get to and from work. Other trips for activities in the evening and night periods can be made attractive to do via transit and without having to rely on an overpriced taxi or a potentially-surcharged rideshare company.

In considering which routes to extend to 24-hour service, I looked at routes that meet these criteria:

Half-hourly service would be much better, but given that service hours are difficult to calculate, this proposal is cautious. If we have the hours, half-hourly trips would be much more convenient.