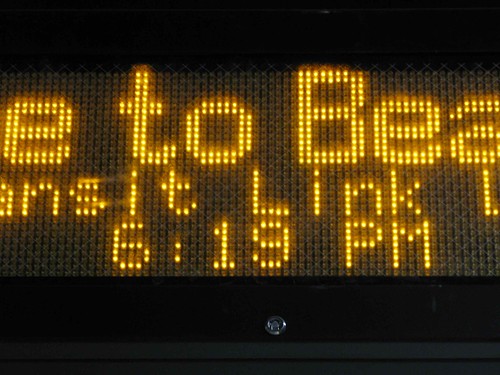 In a Request for Proposals released April 13th, Sound Transit outlined a set of system upgrades for its passenger information systems (PIMS). The most visible component of these systems are the realtime arrival information for ST trains and buses, but they also include backend systems that collect and process the data. This project has three major components: real-time prediction enhancements, better schedule integration, and cross mode messaging, integrating data from multiple transit modes into a single enterprise system. The contract will replace the Public Address system and the station Variable Message Signs currently in place for Link, Sounder and Tacoma Link. Bringing all of this data in to a single combined system may require new or augmented data collection equipment (e.g. tracking or passenger counters).

Passenger-facing improvements include provisions for communicating train size, passenger load, and out-of-service indicators, among a long list of other datapoints. Information would be displayed on station signage, the Sound Transit website, on One Bus Away, and in GTFS/R feeds that interface with third-party services such as Google Transit.

East Link’s budget already funds augmenting the current system to support multiple lines serving the same station. The current two-minute warning announcements would be modified to announce the train’s destination and line color. If the RFP failed for some reason, the existing project would still support multiple lines, while riders would not enjoy any benefits of a more modern information system.

Sound Transit notes that the current Link passenger information system is approaching the end of its life (though some readers may proclaim that has already passed). Replacing the entire PIMS is a disruptive task and Sound Transit has wisely identified that the best time to complete a major overhaul would be in conjunction with the opening of East Link, when major modifications would have been taking place anyways.

The project is backed by lifecycle replacement funds that periodically repair and replace aging equipment as well as a portion of ST3’s technological innovations budget. This RFP covers Link, Tacoma Link and Sounder. Future RFPs will bring ST Express and ST’s future BRT lines in to this system. The RFP boldly states that “multiple, unintegrated systems does not satisfy the [requirements],” but then admits that implementation may come in multiple phases, thus diluting–or at least postponing–the very goal this and the future RFP set out to achieve.

Work on the project is scheduled to begin in 2019; proposers have been asked to offer implementation schedules that deliver benefits as early as realistically achievable. However, some aspects have hard deadlines to coincide with the launch of East Link service.

The full list of features the contract is looking to provide looks like it was lifted out of STB comment threads, and is listed after the break:

END_OF_DOCUMENT_TOKEN_TO_BE_REPLACED