The P-I has a great neighborhood breakdown of the viaduct vote:

This presents an interesting political pickle, and a classic conundrum with respect to direct democracy: do you listen to those who use the thing on a daily basis? Does their vote count more? That’s certainly one way to interpret it. Another would be to impose a use tax (a.k.a. a toll) and build the more expensive tunnel.

In general, we need to start using tolls in the Seattle area. When the Tacoma Narrows Bridge re-opens, it will have a $3 toll. The more that people can come face-to-face with the true costs of using the roads, the more efficient our transportation network will be.

With the viaduct vote out of the way, The Stranger‘s Erica Barnett wastes no time in beginning the campaign for the so-called “surface/transit” replacment. It’s a well-reasoned argument, top to bottom. A couple of key points:

One argument that Barnett doesn’t spend much time on is the idea that removing the viaduct means that I-5 would be the only N/S freeway through the city. That has a lot of people worried, because in the event of a major shutdown on I-5, there would be few alternatives. It’s a concern, but not a serious one: there are still many surface streets through the city, including little-used alternatives to I-5 like Airport Way.

The other piece of the puzzle that Barnett neglects is the funding piece. A surface/transit option would still cost in the ballpark of $2B, including seawall replacement. The state legislature is not inclined to spend that much on something that would reduce capacity, and thus might limit the funds. That would mean that the cheapest option could, perversely, end up costing Seattle the most.

Still, the article’s a cogent outline of what a surface/transit option might entail. it’s very much a first salvo, an attempt to shape the agenda. With the legislature about to go out of session, it’s going to be a long battle.

The bill, which commits $7.4B over two years, would set aside some of — but not nearly all — the money needed for the 520 floating bridge replacement and the Viaduct replacement:

Lawmakers and Gov. Christine Gregoire said for the first time that Olympia must proceed with some projects, most notably the Evergreen Point Floating Bridge, without knowing entirely where the money is coming from. The bridge needs at least $2 billion more.

About $78 million is set aside to cover additional overruns in the next two years and a $1 billion risk pool is created for the Alaskan Way Viaduct replacement and rebuilding the 520 bridge.

The plan assumes $915 million worth of initial work on replacement of the viaduct and would include $120 million in early spending on the 520 bridge.

More on the unique process from the P-I:

Gregoire and other transportation leaders said it makes sense to start building huge highway projects – many of which could take a decade or more to complete – before final designs and total cost estimates are in established.

While it’s true that there are certain non-negotiable aspects of these projects that can be started right away (like new pontoons for a new floating bridge), it seems awful risky to start pre-construction before all the financing is in place. It just kicks the problem down the road.

That said, it is an interesting way to get around the “Seattle way” of talking projects to death and never pouring any concrete. That’s because citizens generally don’t get worked up until fairly late in the process. By the time people start holding neighborhood meetings to oppose a given project, it’ll be half-built.

Funny how Seattle instantly starts to look like more of a city. Maybe it’s the overhead wires.

From the Seattle Times:

 Stabilizing viaduct footings near Washington Street.
 Building a new interchange near Qwest and Safeco fields to help trucks and commuters to move between the waterfront and south downtown.
 Relocating two electrical transmission lines and five feeder lines from the viaduct to Western and First avenues.
 Adding lighting, fire suppression, seismic upgrades and ventilation to the Battery Street tunnel.
 Strengthening steel structures from Lenora Street to the Battery Street Tunnel.
 Replacing the highway from Holgate Street to Royal Brougham Way.

Mayor Nickels, clearly chastened by the result, says he “will not be advocating any particular solution.”

The vote comes in No-No.

Transit may be the big winner.

Former Governor Albert Rosellini offers his memories of the viaduct in this slide show. 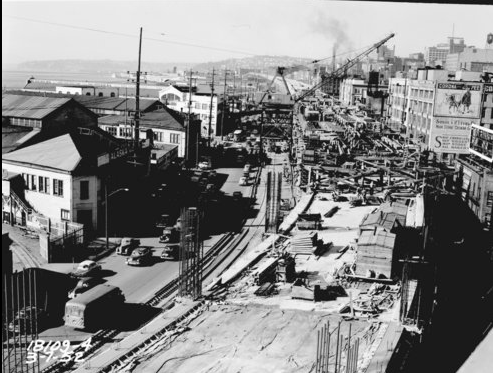 The 97-year-old Rosellini jokes at the end that he hopes they’ll have decided what to do about the waterfront roadway before he passes. Ironically, the next big item on Seattle’s transportation agenda is replacing the 520 floating bridge, a.k.a. the Governor Albert D Rosellini Bridge.

Lets call a spade a spade, and stop pretending that WSDOT offers this state a plan for transportation. The Washington State Department of Transportation has a plan for building, maintaining and expanding highways, at a time when we need to be rethinking our auto-centric transportation system. We simply havent been asking the right questions about how to solve our transportation problems. By revising state transportation goals, we can reframe the questions and have the ability to explore more innovative solutions.

It’s certainly true that WSDOT is still very highway-centric. However, it bears noting that there are several unsexy-but-vital rail projects that the agency is working on in the state. Here’s the complete list.

Basom might still call this is a “spade” and argue that the state has shirked its rail obligations. And that would be a fair point. But if you want to encourage WSDOT to do more, I think it’s important to acknowledge what they’ve already done.

Speaking of light rail becoming a reality, the Operations base opened this week:

Gotta love the “R” in the rail logo, evoking the Rainier Brewery “R” that used to live across the street:

San Francisco’s embarcadero is the most often mentioned comparison to the Alaskan Way Viaduct. So while In SF last weekend, I made sure to snap a few pictures of their waterfront, which now has a lovely street boulevard with an electric streetcar in lieu of the double-decker freeway: These are not computer simulations, they’re actual rolling stock running on actual track in Seattle. Bring it!

The Sea-Tac light rail staton is going to be a bit pricey:

Sound Transit will have to reevaluate its proposed light-rail station at Seattle-Tacoma International Airport after the agency received just one bid to build the stop.

Mowat Construction presented the sole offer to do the job for $95.3 million, far more than the $51.8 million Sound Transit engineers and consultants had expected.

The airport extension itself seems to be progressing pretty rapidly. I hope they figure out how to get a station at the end of it.

In advance of the March 13 viaduct referendum, the P-I has a nice roundup of various local leaders’ opinions. A couple of things stand out.

First, Council President Nick Licata, who’s pro-rebuild, focuses on the affordability of a new elevated structure. With all due respect to Mr. Licata, a half-billion dollars amortized over a century is not a lot of money. Better to do it once and do it right.

Second, Mayor Nickels frames his position as anti-rebuild and not pro-tunnel:

In other words, he’s setting himself up to save face if the tunnel vote fails: he can still claim victory if the rebuild also fails. The question is whether he’s subtly pivoting to the so-callled surface-transit alternative, or whether he just wants to go back to Olympia with a big fat “NO” from Seattleites. We’ll find out after the 13th.

I drove by the Tukwla link station on the way to the airport. Much progress. It’s this week’s photo of the week at Sound Transit: