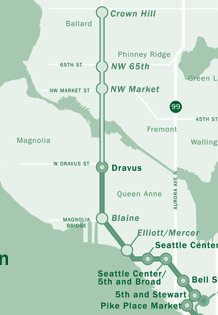 Seeing that poster the other day got me thinking about the aborted Seattle Monorail Project again. I know most people would rather forget it (opening day was supposed to be December 2007, just seven months from now), but there were some valuable lessons there, and certainly the alignment, Ballard – Downtown – West Seattle is going to need to be served by high-capacity transit sooner rather than later. Especially if the Viaduct goes away.

Transit Now will help in the short term, but even the snazziest buses will get caught in traffic on the West Seattle Bridge or stuck waiting for the drawbridge in Ballard. After the Monorail died, the idea was broached to put in a light rail spur connecting SODO and West Seattle. Assuming you could deal with the technical challenges of crossing the Duwamish River, that certainly seems feasible.

But on the North end, the idea of a monorail between downtown and Ballard is still appealing, for a number of reasons. First off, building another downtown tunnel through Belltown seems unfeasible, especially since it would have to somehow cross through the Battery Street Tunnel. Second, we’ve already got a monorail running down 5th Avenue, and people are at least used to it (and used to the monorail making its way through Seattle Center). Finally, a monorail bridge over the Ballard ship canal is more cost-effective than a tunnel.

My only real objection to the monorail is the cost of maintaining a separate transit system (two separate maintenance facilities, engineers, etc.). But if we’re going to maintain the Seattle Center monorail anyway ($4.5M for the latest round of repairs alone), we might as well make it go somewhere.

I’m fairly sure there’s zero political or public will for reviving this concept while the body of the last monorail project is still warm. Still, there’s something there worth saving.