Nice post from daijamin at STB interviewing SDOT’s project manager for the streetcar, Ethan Melone. I’m particularly intrigued by the idea of running the line up Westlake, through Fremont and into Ballard via Leary.

My big concern with the streetcar, other than the obvious stuck-in-traffic issues, has been crossing the ship canal. It seems to me you’ve got two big problems there: (1) having to wait while the bridge goes up, and (2) getting stuck in the traffic jam that results from the bridge going up.

The Fremont Bridge alignment has a lot of advantages over Ballard Bridge (notably the fact that it would serve Fremont!). But two big disadvantages are the congested intersections on either side of the Fremont Bridge.

Now, obviously it would be cool if the streetcar tunneled under the canal, or rose over it at such height as to avoid a drawbridge (a la the Monorail). But both of those options strike me as expensive and unlikely. 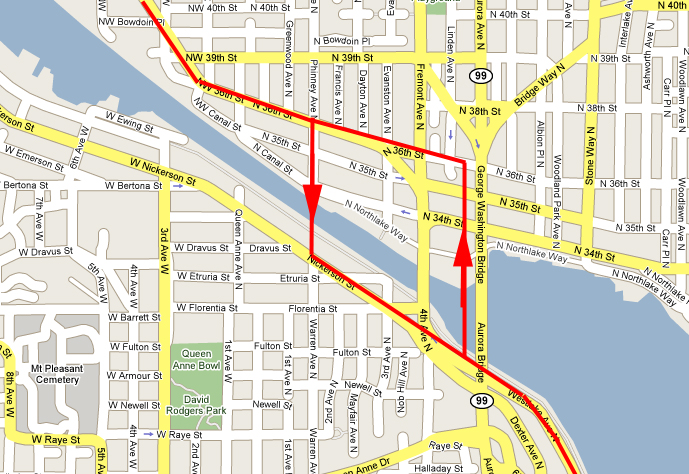 Now, I realize I’ve drawn one of those lines right through the Adobe campus. And for all I know two single-lane drawbridges are more expensive than tunneling under the canal. But I doubt it.

Anyway, consider this just some Friday night fantasy-mapping for your consideration. Thoughts?