I’ve been remiss in not linking to Sightline’s widely-discussed report on gas consumption in the Northwest. The upshot is that gasoline consumption per capita in the Northwest declined 11% since 1999, despite the fact that it’s been holding steady nationwide.

Three factors are cited for the decline: increased fuel economy, increased transit ridership and the decrease in total vehicle miles traveled (VMT). What we don’t know is the relative impacts of these factors. For example, Sightline cites the fact that fuel economy increased 5% in just the last few years. And since fuel-efficient cars sell better in the Northwest than anywhere else in the country, we could chalk up a good chunk of the 11% decline to increased fuel economy. That’s all well and good for global warming, but it doesn’t make for a more transit-friendly region, just a more gas-friendly one.

Still, the increase in transit ridership and the decrease in per-capita VMT are great news for transit and density advocates and cannot be denied. Oddly, WSDOT’s VMT forecast, also used in the study, shows per-capita VMT declining between 2003 and FY 2008, but then inexplicably trending back up in the future. Check it out in chart form. Current data is in blue, projections for the future are in red: 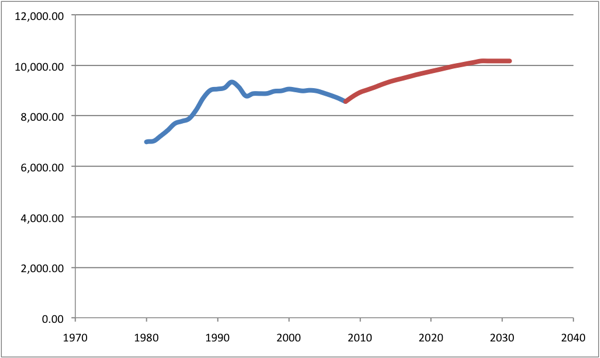 You’d think with a Growth Management Act in place, gas topping $4/gallon and likely to increase, and a huge increase in transit investments, per-capita VMT would continue to decline. But WSDOT thinks the past four years are an abberation, and the figure is going to go back up. This doesn’t make sense to me. In fact, it reminds me of this chart (below) from Gen. Petraeus’ testimony before congress last week, showing U.S. expenditures in Iraq taking a whopping 90-degree turn. It doesn’t pass the straight face test, does it? 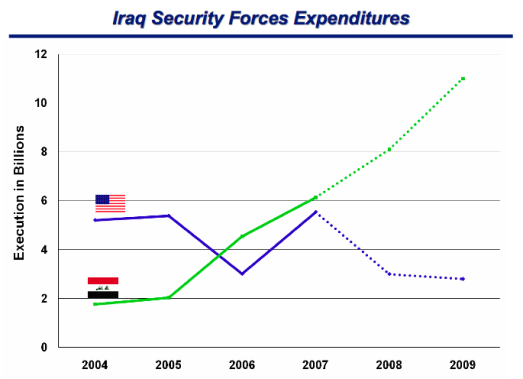 Update: only a couple of hours after publishing this, I see that Clark Williams-Derry, the author of the report, has a strikingly similar post up at Sightline’s blog. His blog post is datelined Friday (in my RSS reader), but it didn’t show up in my RSS reader until 20 minutes ago for some unknown reason. Anyway, read his post because he has better data and prettier charts, which comes with being a full-time researcher instead of a lowly blogger. Still, it’s reassuring that even he doesn’t know what’s going on!