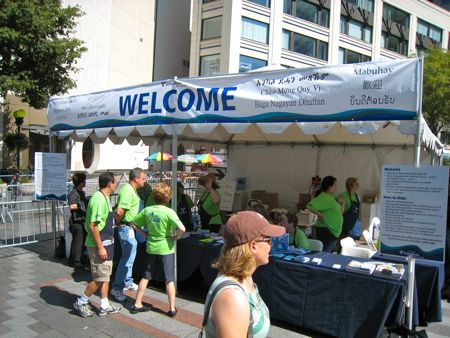 I’ve been slammed with out of town guests this weekend, so I didn’t have a chance to write about the big day until today (though I made sure to drag them all to ride the train with me down to Tukwila and back on Saturday). I don’t have any grand thoughts beyond what Ben @ STB said here and here.

As I stood in the parking lot at Tukwila station, staring up at the giant station structure of steel, glass and concrete, all I could say was, “damn, that’s some infrastructure.” And it’s only the beginning. Link will stitch this city region together in ways we haven’t yet imagined. Think Southcenter regrets not being on the route now? Wait until Bellevue Square gets a station nearby.

Finally, what really strikes me is the parts of this city that Link will make visible. Soon we’ll all know the names of the restaurants and stores along the line. We’ll recognize houses in South Park down below. We’ll show our out-of-town guests the view of downtown Seattle as the train emerges from Beacon Hill.

Oh, and one more thing: props to Sound Transit and the scores of staff and volunteers who worked opening weekend. It was incredibly smooth. The portable toilets and water were welcome. Everyone was friendly. There’s been some talk that ST over-did it, spending $1 million on opening weekend, but it was clearly worth it. The agency had to establish trust with a whole lot more people, and they did that with flying colors. They planned for 100,000 people, and they got 92,000. Spot-on.

Speaking of people, to put that number in perspective, about 54,000 people rode ST buses & trains combined on the average weekday in 2008. It’s likely that a large chunk of people got their first real exposure to Sound Transit this past weekend, and my guess is that they came away impressed. The haters will still be there (read the comment threads at the big papers). Unfortunately for them, this train has already left the station.