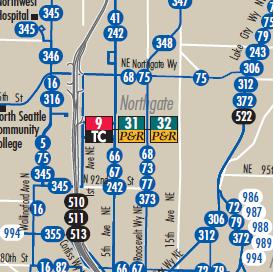 I was toying with doing a whole series on poorly designed Metro maps, but then in the comment thread you guys did a pretty good job of covering that subject.

However, I agree with a point made in the thread that the big missed opportunity in Metro’s system map is the use of color.

In the map, color is primarily used to distinguish who the service provider of each route is.  The problem here is that no one cares who is providing the service.  At most, it might allow you to compute the fare, but anyone able to do that with just a map also knows that you can get that information solely from route numbers. 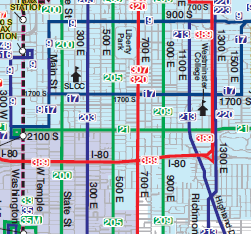 The point of a system map is to quickly understand the options for getting around. Most users need the map when they’re in unfamiliar territory, which will generally not be a peak-hour trip.  The current map is nearly useless for this rider, as the routes he actually can take are hopelessly cluttered by ones that won’t run for hours.

For those really interested in the subject, Adam has uploaded an 18-page survey of Western European transit maps, in which we learn that Metro has chosen a “classic style” map, while I’m advocating for a “Scandinavian style” system map.  The report goes on from there, and people in related fields would profit from reading it.

Oran has also played around with presenting frequency information on a system map.  As always, Human Transit has map-related insights here and here.  [UPDATE: Try this version of Oran’s map instead.]