Although Metro is already eliminating certain low-productivity trips, riders are currently being shielded from the full force of the budget shortfall by some efficiency measures and running down a surplus in the reservecapital fund. Through 2015, Metro faces further cuts, as reported earlier, in the neighborhood of 400,000 annual service hours, or 11% of the current total*. Metro’s current tax revenue is very close to the limit set by the state legislature, and no extension of that authority is on the horizon.

King County’s Regional Transit Task Force, a group of citizens, officials, and stakeholders chartered to review the principles by which Metro allocates service, tonight will receive from staff a report which outlines, in rough draft form, a potential service scenario that reflects these cuts.  Staff were directed to follow the criteria below the jump,where you’ll also find much, much more:

1. Provide transit services to serve the mobility needs of students, people in low wage jobs and people dependent on transit for basic mobility in places where the highest numbers of such people live and work.

2. Provide transit services with a priority on employment centers where the most people, jobs and job growth are present and in corridors with high park-and-ride demand and available capacity.

3. Match the frequency and hours of operation of transit services to the market.

4. Provide transit services that are designed to maximize productivity and cost effective use of resources.

5. Deliver transit service throughout Metro’s service area and match the right type of service with the market served.

There’s a mom-and-apple-pie aspect to many of these principles, but what isn’t there is Metro’s current cuts policy from the County Council: reductions in each subarea in strict proportion to existing service, or 62% to West (Seattle/Shoreline), 17% to East, and 21% to South King County. 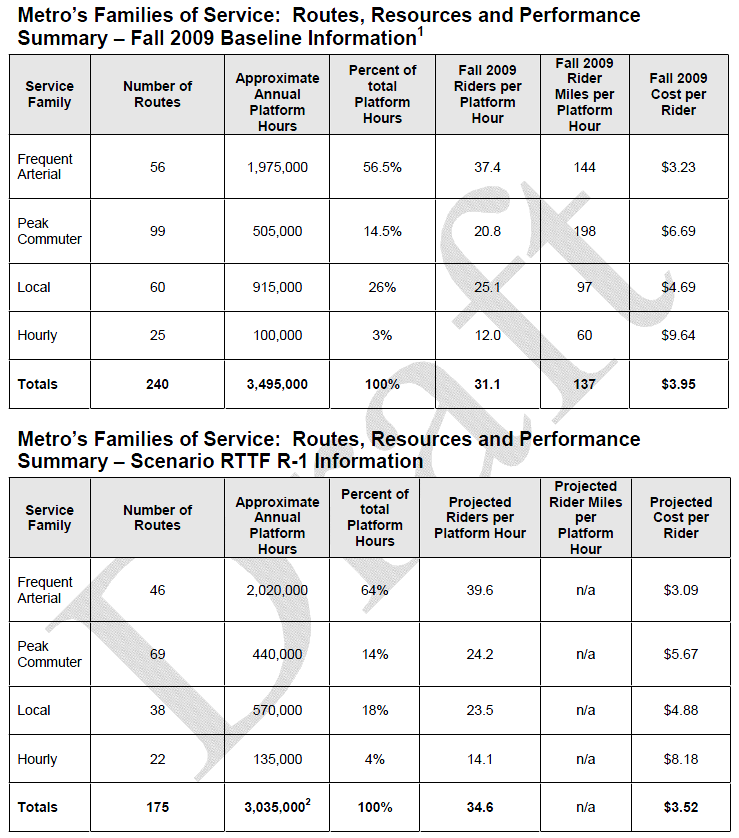 “Local” service (no better than 30 min headways) takes a big hit, in many cases replaced by inefficient “hourly” service which maintains skeletal countywide service for the transit-dependent.

The overall package reduces ridership by 2.5%. The cuts fall 62% on West, 25% on East, and 14% on South, so in fact it’s Seattle-neutral with respect to current policy and it’s actually the South that benefits at the expense of the East.

Some illustrative examples of route changes are:

It’s important to understand that this is a conceptual draft to inform the task force, not a firm plan. This post is already too long, so I’ll just say that a lot of this stuff is basic rationalization of the system that should happen whether or not there’s a funding crisis, but is politically much easier to do in the context of a shortfall. Indeed, the approach of making people transfer to express service is one I advocated for over a year ago.