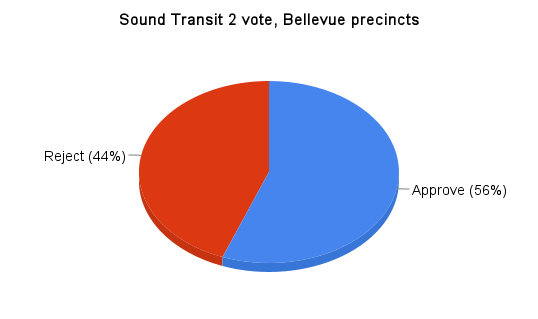 Earlier today, Sherwin pointed out that a noted letter-to-the-editor author who fumes about East Link has blatantly lied in his letters. Among other claims, Mr. Hirt said that the “majority of” Bellevue residents “voted against” funding East Link. Sherwin pointed out that the districts that encompass Bellevue overwhelmingly supported light rail, and showed a graphic depicting the wide majority of precincts in Bellevue supporting Sound Transit 2.

Still, some commenters wanted exact numbers for Bellevue’s support. We’re here to serve: according to the 2008 precinct numbers provided by King County, 56% (28,901) of those who voted on ST2 in Bellevue moved to approve the package that included East Link, while just 44% (22,887) voted to reject it. 5,205 voters in Bellevue were happy with others making the choice for them, and chose not to vote one way or the other on ST2.

And there’s your data-driven fact check that the Seattle Times and the Bellevue Reporter were unwilling to do before publishing Mr. Hirt’s letters.