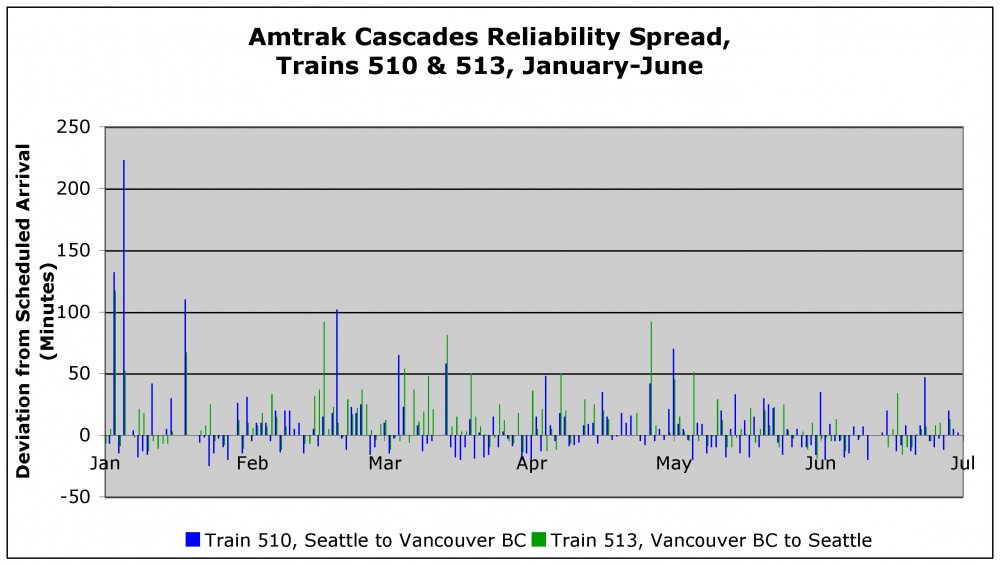 I thought I’d follow up on Martin’s post on Amtrak’s long-distance reliability numbers with some Cascades data that is highly relevant to the conversation.  Commenters expressed frustration with using mean performance as a single indicator of success, and many asked not only for Amtrak’s definition of ‘on-time’, but also to see median, mode, and ‘full-distribution’ data for Amtrak trains.  The problems with ‘mean performance’ have already been kicking around the transit blogosphere lately, and I see little reason to simply reiterate something others have already said well.  But I always find it useful to add data and visuals to a conversation.

By Amtrak’s on-time performance definitions, trains can be 10-30 minutes late (depending on route distance) and be considered ‘on-time’.  With such a wide scope, the concepts of ‘on-time’ and ‘reliability’ begin to drift apart in meaning.  Reliability should mean a consistent travel experience, both qualitatively (comfort and service) and quantitatively (speed and on-time performance).

Check out the chart above.  Using data from the invaluable Amtrak Train Status Archives, I charted the performance of two morning train segments (#510 Seattle to Vancouver BC, and #513 Vancouver BC to Seattle only) for January 1-June 30 2010.

More after the jump…

The chart depicts actual deviance from scheduled arrival time in minutes.  Each blue-green data pair indicate one day. Blue lines denote the arrival of Train 510 into Vancouver, while green lines denote 513’s arrival into Seattle. Gaps indicate days in January and March in which service was shut down due to mudslides.  A negative bar indicates an early arrival.  I notice two things right away:

(1.  EXTREME VARIANCE, which further shows the misleading nature of mean data.  Trains arrived anywhere from 25 minutes early to 4 hours late.  Train 510 frequently runs 15 minutes early (3h 45m), while 513 (largely due to the extra customs check) rarely runs less than the scheduled 4h 25m.  Worst, however, is the volatility of journey times from one day to the next.  On a chart like this, one should ideally see a straight line.

(2.  PERFORMANCE COUPLING.  Notice how delays on #510 frequently cause reciprocal delays on #513, and vice versa.  I chose these two trains for a reason; they run on single-track and must pass each other in a siding just south of Mt. Vernon.  If one is late, the other train will usually be late as well, and the effects ripple throughout the system.  Very rarely on the chart is there a day in which one train arrives early and the other very late.  On single-track rails things are so finely tuned that minor mistakes can translate into major operating issues, and margin for error is always small.

Anyway, the point of this post is not to undertake a major analysis, but rather to (1.  provide a visual that strikingly shows how average performance numbers offer little in the way of relevant customer information, and (2. to let our readers know that the data is indeed available if one is willing to do the stats themselves.

(Note: This post revises and substantially updates a post from my earlier blog.  The original will be integrated into the STB archives soon.)