My impressions are that Metro did a good job today of communicating snow routes and various changes as the day went on. The agency came off as organized, prepared, and all on the same page. Moving every route to a snow route set the appropriate expectations for riders and helped minimize confusion. Drivers were jovial and professional.

Improved communication will not wipe away severely inclement weather and our collective inability to commute through it. While Monday gave us a chance to all sigh about how our bus came at a random time in the morning or how the afternoon was a complete mess, the only response to those complaints we love to share is that there is no fix. Snow will hurt transportation in Seattle. More rail would help, but rail has also its own problems. The way to avoid getting snared in gridlock when it snows: don’t commute.

In short, the trains have been running absolutely normally — seven to 15 minutes apart, with no added travel time.

That doesn’t necessarily mean light-rail riders never have to worry about inclement weather. Patrick says freezing rain presents a particular danger due to the overhead electrical system used by the trains. If ice forms on the wires, that could cause a breakdown.

But Patrick says there is a solution: Sound Transit can run the trains all night long, rather than stopping them between 1 a.m. and 5 a.m. as usual. That should keep the ice from building up. 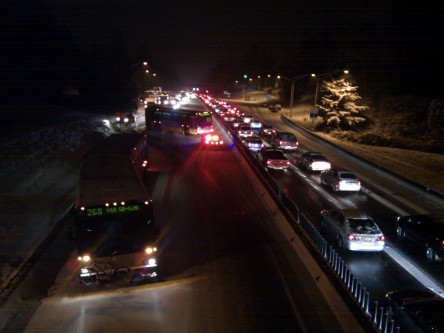 Four hours after he boarded the No. 22 downtown, he was reading through a circular and wondering if the Mariners were in fact seriously interested in trading for the Diamondbacks’ outfielder Justin Upton. We all just hoped we’d reach West Seattle by the time any deal might be consummated.

University of Washington: The UW Seattle and Tacoma campuses have suspended operations and canceled classes for Tuesday. 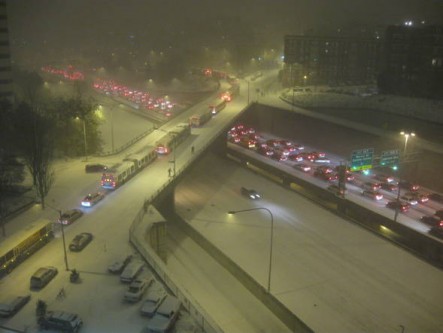 @seatransitblog: The degree to which you can continue to live normally with weather like this is a rough measure of your transportation sustainability.