Although Community Transit has suffered deep service cuts and has no state-granted ability to raise tax rates, it hasn’t stopped visualizing what Snohomish County’s transit network should look like in two decades.

The study, conducted by Nelson/Nygaard and completed last month, identifies key transit corridors and appropriate levels of additional investment for each by 2030.* It is a statement of aspirations, designed to drive future investment decisions, rather than a firm, funded project list. “Economic recovery and new transit investment will happen,” the report explains.  “When it does, the new system that is built will be different than the one that we cut.”

Like many other agencies, CT is looking to support rapidly densifying cities like Lynnwood with frequent, rapid all-day service through less emphasis on peak-only commuter routes, very much helped by the fact that Link will be moving masses of people from Lynnwood to the UW and Downtown Seattle. More after the jump.

The map above is a detail of the identified transit emphasis corridors. The blue, yellow, and green lines correspond to Swift BRT, Arterial, and all-day local service: 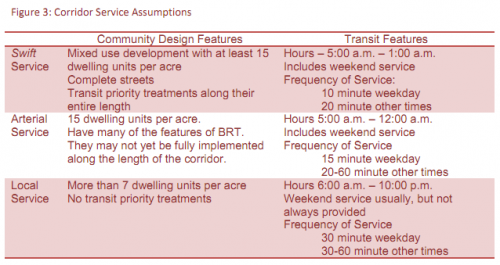 Chapter 2 describes each of the emphasis corridors in detail.

We’d always assumed it, but the plan officially envisions redeploying Seattle-bound express buses with Link feeders, in addition to peak expresses on I-405, SR 9, SR 522, SR 525, and US2. 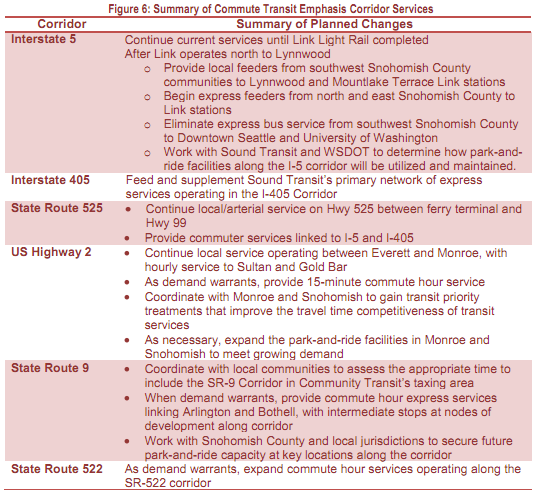 However, that service increase would require $100m in additional annual operating expenditure, plus something like $1 billion for more buses and transit priority treatments. For comparison, CT’s entire sales tax take in 2010 was $61.5m, down from a peak of $76.6m in 2007. The report’s scope did not include concrete proposals for this, and population growth may help a lot, but that kind of increase would require a fundamental change in attitude in Olympia.

There is a lot more information about park & rides, vanpools, paratransit, other local service, and implementation steps.  This report presents an extremely attractive vision for Snohomish County transit, one entirely consistent with the values often professed at STB.

* The Seattle Transit Master Plan is using the same approach and same consultant, so it’s stylistically a good preview.