I wouldn’t expect someone who wants to build everything — highways, transit, etc., to have much of a problem with the deep bore tunnel. I certainly wouldn’t expect a pro-highway, anti-transit person to like surface/transit. What less understandable is people that think the marginal dollar is better spent on transit, including the vast majority of the people hanging around here, are at the same time surprised that STB would take a strong position in favor of surface/transit/I-5.

I’ve tried several times to break down the numbers in different ways, but I think those articles may be a bit hard to follow. I think the chart below really lays it out. It shows what the money is being spent on in the deep-bore tunnel, four-lane rebuild, and surface/transit/I-5 options that were in play in late 2008 and early 2009 when Governor Gregoire, Executive Sims, and Mayor Nickels reached their agreement. For clarity, I’ll leave out the $1.1 billion in “Moving Forward” projects, mainly the highway through Sodo, that are uncontroversial and apply to any option.  S/T/I-5 has the most transit and the least highway.

All figures in millions 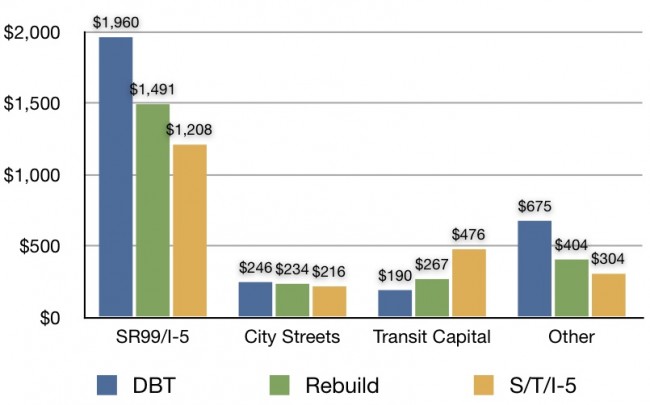 “Other” includes the seawall, mitigation, the park, and so on.

In the current debate, spending $1.2 billion on highways and hundreds of millions of more on city streets is viewed as irretrievably hostile to drivers.

Once again, I have to point out that of the $2.4 billion in gas tax money committed to this project, $1.1 billion is going to the aforementioned moving forward projects, and all the plans have well over $1 billion in highway projects, so it’s simply not true that the bulk of the gas tax money couldn’t be used for the other options.

Lastly, a word about our continuing coverage of this issue. STB staff are encouraged to write about whatever interests them, within reason. This debate has been prominent for a while, which creates interest. Second, the level of public discourse has been exceptionally poor, filled with distortions, fearmongering, tangents, and lots of misconceptions; I think articles not afraid to get into the numbers and bring the subject back to first principles are a useful corrective. Third, the tunnel is very likely to happen given its very strong support at all levels of government and divided public opinion. The Protect Seattle Now initiative is a necessary but not sufficient step, but the most important task is to convince people there are better options.

131 Replies to “The Viaduct Replacement in One Easy Chart”