Since October 2004 Sounder commuters with full-fare passes have enjoyed free access to Amtrak Cascades between Seattle and Everett through the RailPlus program.  Barbara Gilliland, then Sound Transit’s Deputy Director of Transportation Services, called it, “One of the easiest agreements I’ve ever worked on.”  Yet very few riders utilize the service; in February 2011 only 126 RailPlus tickets were issued for the entire month.  (Equivalent to 2 people making one round-trip per day!)  Ridership for the past year has generally ranged between 80-160 boardings per month.

Cascades times north of Seattle are hardly ideal for commuter use, with two-peak hour trains from Seattle (510, 516), one mid-day train from Everett (513), and one late night train from Everett (517).  Further, only full-fare passes are accepted, with no E-Purse upgrades permitted.  Due to the higher fare on Sounder vs. ST/CT buses, most Northline Sounder riders have employer-subsidized passes, increasing the likelihood that riders are peak commuters into Seattle for whom the schedules would be unworkable (except for Train 516).  Throw in mudslides, general reliability issues, and the ease of express service from Everett on ST 510, and you have a system that structurally disincentivizes people from trying the train. More after the jump.

What about RailPlus between Seattle, Tukwila and Tacoma?  Wouldn’t it be great to offer the equivalent of mid-day Sounder service without requiring any additional track easements or operating costs?  Last September I asked Vickie Sheehan at WSDOT about the idea and to ask how many seats are usually available between Seattle and Tacoma:

The average load factor is not the deciding factor when making arrangements to accept commuter tickets on Cascades, or Amtrak tickets on Sounder trains.  The factors to be considered involve the adequacy of the existing services and the number of days trains are at or near capacity, rather than the average load factor.  Current demand for travel on the Seattle to Portland route is much higher than between Seattle and Vancouver, B.C. and is growing. Ridership projections do not show sufficient space on trains to make the Rail Plus fare an option to be pursued at this time between Seattle and Tacoma. In fact our projections show that we shall soon be in a position where demand outstrips supply.

While I understand the point about capacity, it is my understanding that Amtrak ticketing procedures overrepresent their load factor to make fewer seats seem available.  According to Amtrak staff, seats cannot turn over between either Vancouver BC-Seattle or between Seattle-Portland.  A rider from Everett to Seattle, for example, ‘ghostrides’ the train between Vancouver BC and Everett and that seat cannot be sold again until south of Seattle.  Thus a ‘sold-out’ train will always have many empty seats.  So while theoretical capacity may be reaching its limits, a more functional ticketing system with the ability for multiple turnovers would allow commuters to sit in seats destined for other folks between Tacoma and Portland. 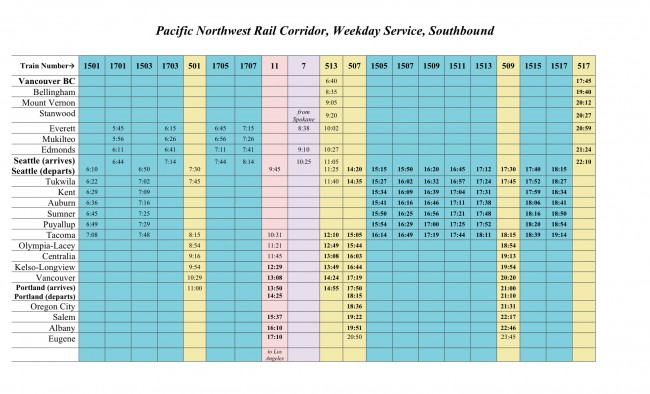 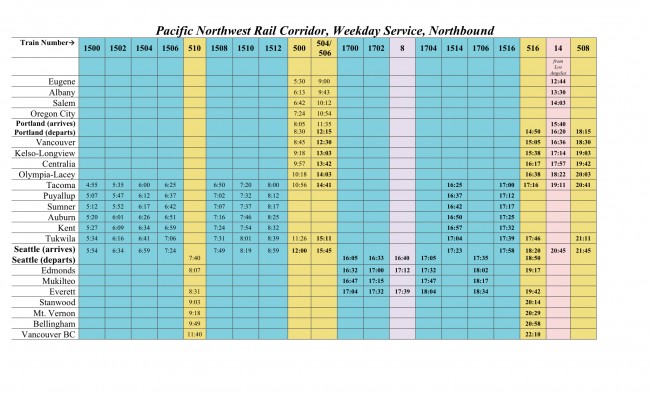 South Sounder has an endpoint problem.  The 55 minutes between Freighthouse Square and King Street aren’t competitive either on time or cost with the 590-series, whereas from Puyallup northward Sounder is the fastest commute available.  Adding RailPlus would improve Tacoma ridership by providing the option of a 45-minute train between Seattle and Tacoma.  I understand this will only happen, if at all, after the Pt Defiance Bypass when Amtrak moves to Freighthouse Square.

It’s an attractive vision;  commuters using Amtrak and interurban non-commuters on Sounder.   Maybe Sounder is too cheap, but Amtrak’s $13-$20 between Tacoma and Seattle is way too much.  Can we find a better synergy between South Sounder and Amtrak?