Just over a year ago, Mayor McGinn formally recommended the Broadway/Yesler/14th/Jackson alignment for the First Hill Streetcar. At the end of his letter to the council, McGinn also pledged support for a number of related transit changes:

• Improving transit access to the Boren/Madison area, through measures such as speed and reliability improvements to existing Metro routes;
• Developing alternatives that provide north-south transit service in the 12th Avenue corridor;
• Extending the First Hill Streetcar to the north end of Broadway, to support the economic revitalization of Broadway and improve neighborhood access to the Capitol Hill light rail station.

In Seattle political realities have often dictated that we undertake Transit-Planning-By-Consolation-Prize.  When First Hill lost its Link stop, it got the streetcar instead.  When the Broadway alignment was chosen for the streetcar, McGinn then pledged support for additional service on the neglected alignments.  As imprudent as such a patchwork approach may be for transit planning, it also opens up the broader discussion of how best to serve those markets.  So, how should the arrival of rail affect bus service on Capitol Hill, First Hill, and the Central District? To my mind there are several important guiding principles:

In the spirit of Martin’s Rainier Valley Mobility proposal, I started playing with scenarios.  I intend this proposal strictly as a conversation starter: What are the pros and cons of a radical grid system in central Seattle?  The bus routes below collectively represent about 99,000 boardings per day (2009 data), and wholesale changes would not be likely without the arrival of rail. But I’m convinced that by eliminating redundant routes and making peace with single transfers, we can offer 7-15 minute service on every route without incurring additional operating costs, while sensibly leveraging our investment in rail. So here’s a fairly radical sketch to tear apart in the comments:

Much more after the jump…

12th Avenue
12th Avenue is only two blocks from Broadway, and the closer 12th Avenue gets to Capitol Hill Station the more duplicative bus service would become.  But 12th Avenue is very valuable as the only north-south connection to Beacon Hill.  So I propose eliminating Route 36 and turning Route 12 into a 19th Ave E/Madison/12th Ave/Beacon Hill/Othello crosstown service.   With lower densities along 19th Ave E, some #12 runs could continue to terminate at 15th/Madison.  To compensate for the loss of Route 12 on Madison St west of 12th Avenue, I propose making Route 11 an all-Madison bus (partially electrified, trolley service to 23rd alternating with diesel service to Madison Park).  To then compensate for lost frequency on Pike-Pine, I propose running the 10 at 7.5 minute headways.

Boren Avenue
For Boren Avenue, reroute the 7 into a Rainier Valley to Lower Queen Anne service, running on Rainier Ave S, Boren Avenue, Denny Way, and Route 8’s LQA loop. Boren is wide, straight, currently lacks transit service (except for the strange anomaly of the peak-only #205), and serves a very dense residential neighborhood. Furthermore, Boren provides a fast bypass of downtown that could reduce pressure on downtown trolleys and dramatically speed up trips between First Hill, South Lake Union, and Lower Queen Anne.  Some Route 7 passengers traveling to downtown could retain a one-seat ride option on the 39 (or the peak-only 34), or have several high-quality transfers to choose from (Link at Mt Baker, the Streetcar at Jackson, or frequent bus routes 14, 27, 3, 11, 2, or 10. 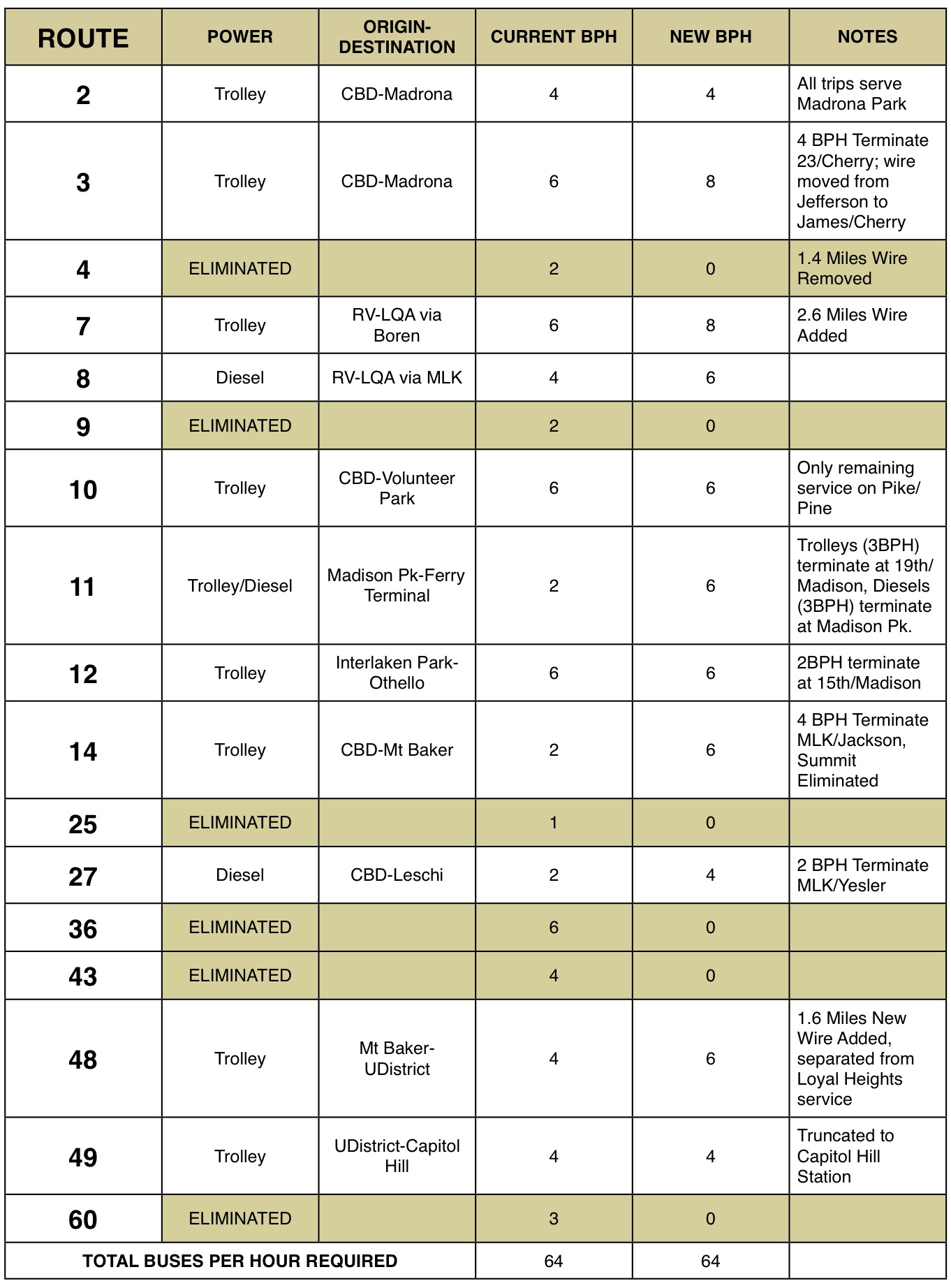 Limitations: This proposal does not analyze full service hour requirements, route interlining, downtown routings, scheduling for optimal transfers, or routing changes outside the central area (such as the 70-series or the Queen Anne termini).  It’s possible that these changes would be less efficient when all operational requirements are considered.  This proposal would also require removing 2.4 miles of trolley wire (E Jefferson between 9th and 21st, and all of Route 4 South) and installing at least 4.5 miles of new wire (12th Ave between Madison and Jackson, Boren between Jackson and Denny, James/Cherry from 9th to 21st, and 23rd Ave between Jefferson and John).  The proposal eliminates many politically popular one-seat rides in favor of network frequency.  Walking distances to transit increase for riders in Summit and Judkins Park.  Despite inefficiency, eliminating fixed-route service to Lighthouse for the Blind (Route 4) may be neither politically possible nor morally desirable.