For those of you who just can’t get enough data, I have a present: Metro’s 2010 route-level performance data in Excel format. For ease of reference, I’m including it all here along with the same data for 2009 and, courtesy of Mike Shekan, similar data from 2008. If you don’t have anything that can read Excel files, open it in Google Docs and export it in the format of your choice.  Here’s a chart of of the top 20 routes by annualized ridership: 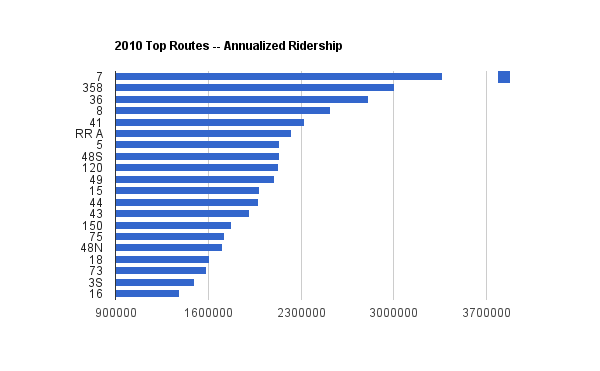 Per Metro’s policy, this performance data is annualized data based on the 3rd quarter of 2010, same as Metro’s 2009 data. This means the ridership in this chart is simply the number of riders for that quarter multiplied by four, rather than the true ridership; similarly with all other numbers in this spreadsheet. I have a couple of posts coming up where I’ll drill down into this data and compare it to prior years. Also, note that the 2008 data is formatted slightly differently, and the routes are broken out differently, so some care is required when comparing that data to 2009 and 2010. Enjoy!

Update: I’ve modified this chart to correctly include RapidRide A.