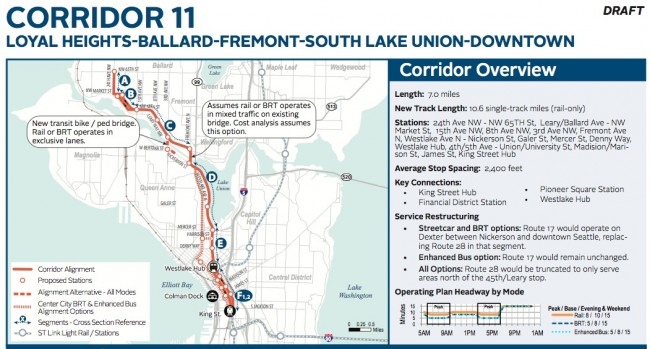 It seems like a long time ago already, but there was a lot of momentum behind this thing called the Monorail. I won’t even get into the details, the politics, and the goofiness of what became a battle about whether light rail or mono rail would carry the day. In the end, the monorail disintegrated under many of the same circumstances that some of us think will pull down the tunnel; Frankenfinancing, just-trust-us politics, and poor planning. But the latest effort for a hearty Vehicle Licensing Fee (VLF) could keep one of the promises that the monorail mess couldn’t keep, rail transit for Ballard.

I’m going to quote from a memo written by the Seattle Department of Transportation (SDOT) asking for an $80 VLF in order to plan and execute rail to Ballard. High Capacity Transit is really another way of saying rail. Feel free to challenge that assessment in the comments, but here’s what SDOT is asking for:

For the Ballard and Eastlake corridors, HCT is the only option that meets projected transit ridership demand.  There are also travel time and greenhouse gas emission reductions that would not be attainable through other modes. Having the flexibility to pursue additional HCT planning would create a phasing process of (1.) 6-7 years of bus corridor development while simultaneously doing planning and design for two HCT corridors: Center City Connector and Ballard, and (2.) in years 7+,  focus on HCT corridor implementation and continued bus corridor improvements.

The experts are saying a longer collection period of the full $100 in VLF ($20 is VLF already happening) allowed by law would meet the demand for transit to and from Ballard. I am a demand side guy when it comes to transit, and that’s a big reason why I am a “density advocate.” Much of the whining and complaining about density has come from Ballard. Remember Edith Macefield? She’s the Ballard woman elevated to hero worship status by a peans written by Knute Berger and others because she held out against invasive “highest and best use” of land in Ballard. The truth is that Ballard has changed. Old Ballard has given way to the future many of us talk about. The old Googie Denny’s is gone in favor of density and everywhere you look there are people waiting in absurdly long lines to pay lots of money for fancy dinners.

Ballard, like it or not, has done much of it’s part in transforming Seattle into the dense, walkable, fully built out neighborhood that aggregates demand for transit, just like we density believers say it should. We’ve got the demand, now where’s the transit? It makes it hard on density advocates like me when the transit doesn’t follow the density. We’ve put all our rhetorical eggs in the density basket. If the City doesn’t up zone around transit or follow density with investment in transit where there already is density, it kicks us right in the eggs. The Council should do the right thing by Ballard on Monday, and support the maximum use of VLF so we can be sure that we put our money where our density is. If nothing else, do it for Edith.

104 Replies to “Ballard and beyond: $80 VLF helps realize a Monorail dream”