What was publicly billed as a hearing of the Seattle City Council in at Roosevelt High School last night quickly devolved into a bullfight of sorts, with Roosevelt Neighborhood Association land use committee chair Jim O’Halloran as the matador and the proposal for more density in the neighborhood as the bull. We all know what happens to the bull. After a presentation of the proposal by City staff most of the meeting was spent hammering the nine members of the City Council over and over again with the reasons why near by neighbors think increases in height near the high school would be a terrible thing.

The neighborhood’s reasons stated over and over, came down to three stated and one unstated one. First, neighbors feel that any changes from their plan would be an abrogation of the sovereignty of those who live “near by.” That is, there is privilege that comes simply from living down the street from a proposed project that should afford those people the right to veto changes to zoning in their neighborhood. And let’s not forget the “many hours in meetings” neighborhood planners invested. Rejecting that would be a slap in the face by the Council to hard working citizen planners.

Second, the views in and out of the high school would be blocked. On the few days a year when cloud cover breaks, local neighbors want high schoolers busy at work on reading Moby Dick perhaps, to be able to look up and see the tip of Mount Rainier. And they want to be sure as they walk their dogs on 65th they can gaze up at the iconic high school after scooping. I’m not sure why it is so important to keep an eye on the school so intently. Is someone trying to steal it? I thought David Copperfield was retired, had he threatened to make it disappear? More after the jump.

Lastly, as just as strange, is the phrase repeated again, and again, that “Roosevelt is taking lots of density” or “we’re taking 85 feet for crying out loud!” Density for the Roosevelt neighbors in the high school theater see density as bitter medicine that they are willing to take as sacrifice for the rest of us. Thanks guys. I am glad that you’re willing to “take” all that density. Various quantitative forays were made to explain just how painful all this density was going to be. Nevertheless, Roosevelt can take it!

The verse left unsung by the We Got Here First Choir last night was the one about how angry the neighbors are at developers in general. When a friend of mine who works for the Downtown Seattle Association got up to earnestly share her views she made the mistake of saying “I work with mixed use developers.” The chortles and heckling and booing were audible. Neighbors seem to think that developers, especially the ones in their back yard, are really horrible. I guess they never read The Fountainhead. While neighbors continue to claim “this has nothing to do with Sisley,” their demonstrations at my friends comments say otherwise.

Sadly, Committee of the Built Environment chair Sally Clark allowed this show to unfold in the name of democracy, I guess. But while I don’t mind raucous debate, many of the people in the audience who came to speak in favor of density were intimidated. As one of them said, “I’m not used to doing this.” But surrounded by what sometimes became a mob they managed to make some good points. Meanwhile one member of the neighborhood was allowed to go on for 8 minutes (the limit was 2) calling on members of the Planning Commission to fire themselves. Let’s hope if, as rumor has it, Clark is indeed slated to be Council President next year that she takes some lessons on managing debate from Betty Boothroyd.

In the end the Council is truly considering incremental not exponential change for the neighborhood. What’s unfortunate is that the people, as one pro density speaker put it, aren’t here yet. She made a valiant effort on appealing to Councilmembers not just to listen to the baying of the angry people in front of them last night, but the thousands and thousands not in the room that will take light rail, be looking for affordable housing, and hoping to start new businesses in the neighborhood. Leadership is hard, because some times it means making decisions in favor of constituencies that aren’t just silent but don’t exist yet. Let’s hope Council rises to the occasion and supports the proposal for more density in Roosevelt. 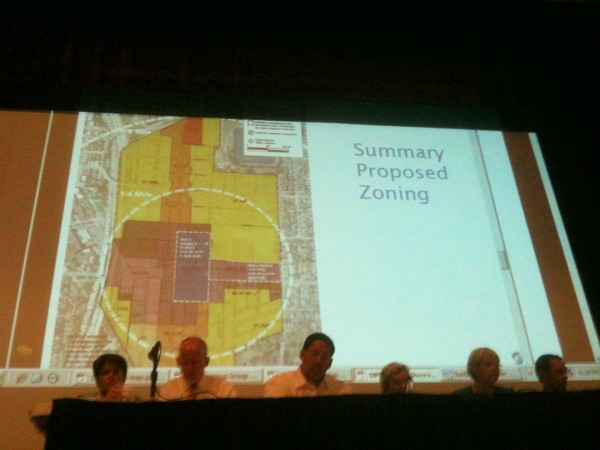 122 Replies to “Ole! Upzone proposal gets skewered in Roosevelt”