The barren moonscape that surrounds the Beacon Hill Station is the poster child for the institutional and political failures endemic to Seattle’s approach to Transit Oriented Development. A picture of the stubby station box poking out of the ground is the front picture on my land use blog. I’ve gotten endless use from images of the lonely station as a sad commentary on the state of TOD. But maybe that’s changing.

Tomorrow night at 6:30 the Southeast Design Review Board will review a proposal for a four-story, 30 unit commercial and residential building including parking on one piece of the vacant lot surrounding the Beacon Hill station.

It’s a pretty modest proposal. But I have this feeling some people will appear to oppose it. I’m really hoping that isn’t the case, but my sense of land use politics tells me that, like most design review meetings, neighbors will emerge with all kinds of reasons why this project is wrong for Beacon Hill. More after the jump. 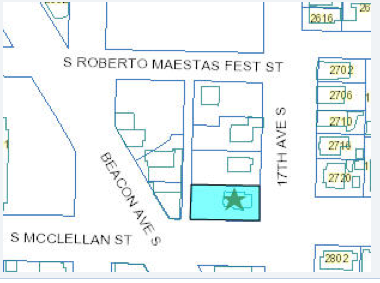 I’m going to withhold thoughts about the neighborhood until after the meeting, but let’s face it, 30 units on the corner of the station lot isn’t much density. And right now the zoning around the station area is a jumble of 40-foot Neighborhood Commercial and single family that isn’t really suitable for very much new development. Big changes are needed like the ones I described previously to get Beacon Hill where it needs to be.

Beacon Hill’s neighborhood plan, calls for “a strong neighborhood commercial district and opportunities for mixed use residential development.” That is going to be hard to do when single-family neighbors have vigorously opposed significant upzones around the station. The most glaring missed opportunity is the Red Apple property across the street, an ideal TOD site.

Whatever the neighborhood does, the project will go forward. One of the unfortunate things about design review is that it can often turn into group therapy for neighbors who oppose projects. The board has to explain to angry neighbors that they can’t change the underlying zoning. Subsequent meetings are about excruciatingly specific details of the project (windows, roofline, curb cuts) and tweaking them for the neighborhood.

By the end of the design review process the room is mostly empty except for a few neighbors still opposing the entire project on principle and the developer explaining the numerous and minor adjustments made to ease various neighborly worries. My favorite example is the frosted glass a developer had to promise to install on balconies to shield neighbors from the prying eyes of residents of the new building.

Design review was intended to allow slight departures from code requirements in exchange for greater input from the public about the look and feel of the building. In the end it really doesn’t do much more than push project envelopes around. As I pointed out in my review of design review the process probably doesn’t hurt anything, but it doesn’t yield more density or more development capacity. And it tends to frustrate neighbors more than anything else, giving them a sense that they can’t beat City Hall. We should change design review as we consider a citywide approach to TOD.

Nevertheless, once the frontlash at design review fades, the project usually doesn’t have all the negative impacts people worried about. People end up living with the project and even liking it. In this case 30 units is just a drop in the bucket. But maybe once the project is done it will be a wedge for more development, and maybe neighbors will realize a “strong neighborhood commercial district” their plan calls for requires more people moving to dense development on Beacon Hill.

The meeting of the Design Review Board is at 6:30 p.m  on Tuesday, October 25th, in the Community Room of the Well Spring Family Services, 1900 Rainier Avenue South.

38 Replies to “Can They Take It? New Development on Beacon Hill Up for Review”