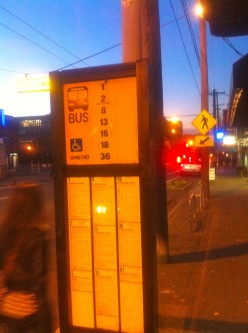 I took a different route to work Wednesday morning. Instead of the Metro #3 or #4, I hustled down to lower Queen Anne and hopped on the #8 bound for Capitol Hill.

I chose this route because the Queen Anne-to-Capitol Hill-to Rainier Valley route will receive significant improvements if the voters approve Proposition 1 next week.

I caught the 7:38a.m. trip at the corner of Queen Anne Avenue North and Mercer Street, just a minute after OneBusAway told me it would arrive. Of course, with Prop 1, instead of relying on a bus app (as great as it is), riders could just look to the real-time information signs that display when the next bus is coming.

Efficiency improvements from Prop 1 include transit priority traffic signals and curb bulbs at stops so buses can pick-up and drop-off without having to pull to the curb. Metro reports that the average speed of a bus in Seattle is between 6 and 8 miles per hour. The improvements will help increase these speeds to 10 to 12 miles per hour, a significant difference if you’re trying to get to work, home or school.

One of the first differences I noticed as we traveled east on Denny Way toward Capitol Hill was the age of my fellow riders; much younger than my regular transit experience to and from work. Most looked like students on their way to Seattle Central Community College or Seattle U. We had the usual collection of office workers, too.

What if this bus had a little device that would change the traffic signals for our benefit and turn them green to keep buses moving faster? That would help a lot along a congested street like Denny Way. Proposition 1 will make that investment, improving travel times for all riders. More after the jump.

After we got to the top of the hill I realized I needed to get off the bus (thank you, OneBusAway), since I wasn’t actually headed to Rainier Valley, so I could transfer to a downtown bus. I executed that move flawlessly. My transfer bus (Metro #49) arrived seven minutes later. While I waited, my mind took me back to the 1950s when my mom and I rode the bus from our Capitol Hill house to downtown. The stretch along Broadway was my favorite because it was so familiar, but the view toward downtown when we made the turn on Pine Street was the most exciting. At my young age, the big city looming before us represented drama, something new I dreamed about exploring by myself someday.

Transit services like Metro are so important for cities. They move large numbers of people comfortably and efficiently. They provide an excellent alternative to single occupancy vehicles and help protect our environment. They provide vital transportation services for thousands of people who can’t afford any other option. That’s why investing strategically, like Proposition 1 calls for, is so wise even in tough economic times.

A lot has been said about the regressive nature of vehicle license fee, but investing in transit and good transportation infrastructure is one of the best things we can do for our low-income neighbors. Better service, faster service, more efficient service, these are values that help everyone.

The author is a Seattle City Councilmember.

23 Replies to “A Different Route”