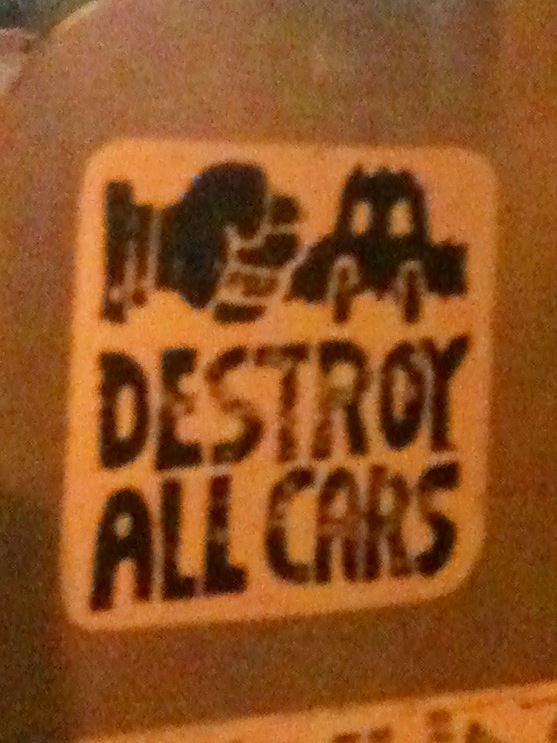 If there isn’t a “war on cars,” why isn’t there one? After all cars are the leading producer of carbon emissions that contribute to climate change. Also, the automobile as a form of transportation has been the central to a social engineering project that promotes far-flung single-family homes woven together by a web of expensive highways, punctuated by shopping malls.

But a war? Of course not. Even though Kemper Freeman quite unabashedly has declared war on transit in our region on behalf of the car, we (transit advocates, pedestrian advocates, environmentalists etc.) aren’t at war. We’re engaged in “messaging.” Messaging is another way of saying “persuading people to do the right thing,” and it’s failing.

The failure of Proposition 1 in my estimation is due to several factors not the least of which is a tough economy. But I think the other side had, to be consistent with my colleagues’ language, a better message. “Why spend your cash on elaborate and fanciful transit planning efforts when you just busted your axle on a gigantic pothole?” they asked. “And those Prop 1 people are just trying to get you out of your car.”

“Absolutely not!” answered the other side. The Prop 1 message was all about how spending $60 on registering your car would help fund things that you wouldn’t use—unless you got out of your car. “This isn’t a war on cars, it’s an effort to make all modes safer and faster.” More after the jump.

Some of my erstwhile colleagues are probably a bit annoyed with my Crosscut article a while back describing how I decided to vote ‘yes.’ My public deliberations are “off message” probably because I talk about “making it harder to drive.” Those words are forbidden in my circles because it gives credence to the idea that we’re waging a war on cars.

The campaign and all of us are in a tough spot when it comes to this messaging. Reveal that what the outcome of what we’re doing will do is lead to less driving and we lose the driver, which means most people.

But deny the simmering “war on cars” and we risk having a very public and embarrassing Captain Renault moment when we declare, “I’m shocked! Shocked that you’d suggest that we’re waging a ‘war on cars'”

How about this as a message: tell the truth. Cars are awesome. I love cars. I have my own Aston Martin fantasy and everything. But cars as a primary  mode of transportation are headed for the dustbin of history. It took 100 years for the car to emerge as the dominant form of transportation in the United States. There is nothing that says we can’t reverse that trend.

But if that is going to happen, we do need to create policies that increase the costs of driving and decrease the costs of other modes. That means density, so that transit is efficient and affordable. We are at war, not so much against the car, but against a conceptual framework built around the idea that somehow we can simultaneously subsidize cars while trying to coax people out of them with data. That is a war we have not alternative but to win.

53 Replies to “Proposition 1 Fails: Got the Message?”