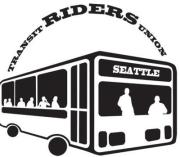 The Transit Riders’ Union is having a launch meeting in the Central District:

Join us on November 15th for a discussion of the fate of public transit in Seattle and beyond. We will talk about the Transit Riders Union’s plans for the future, and announce our upcoming campaign. Short presentations by a panel of speakers will be followed by open discussion. Light refreshments will be provided.

Curious about what this launch means, I had a chat with co-organizer Scott Myers, and edited for length and clarity, below the cut:

How do you relate to the old Transit Riders’ Union?

Basically, we started the Save our Metro campaign during the bus cuts thing. We met a lot of people doing that, and decided to start a permanent organization. We got in contact with Rodney Rutherford [of the old TRU] and he offered us the name, but it’s pretty much a completely new organization that just has the same name.

How many people are currently involved?

There are about 10 core organizers, and maybe 20 to 30 that are obliquely connected.

And you’re seeking to recruit more at Tuesday’s meeting?

Yeah, that and to let other people and groups know what we’re about.

There are other organizations advocating for expanded transit funding, like the Transportation Choices Coalition. What unique focus or resources will the TRU bring the table?

We went to these [Metro cuts] hearings, and there are individual bus riders coming to these meetings, but there was no real organized force for these bus riders, especially poor and working riders. A lot of getting more money for transit also involves shifting the tax burden away from progressive sources and onto the middle class or poor and working people. We want more money for transit, but we don’t want that cost shifted onto us. We can’t afford it, and we don’ t think that’s a sustainable way to do that. When sales tax revenue goes down, like in a recession, the only option is cut our service. We want a lot of the same things [as TCC]. I believe poor and working bus riders will get behind progressive transit initiatives if they’re organized.

Your posted list of principles talks a lot about expanded, progressive funding sources for transit. Are you going to inject yourselves into debates on how those transit dollars are allocated?

We don’t have any concrete plans. I’m sure we will have to weigh on these things. It all comes down to our principles. We want rail and an efficient system, but not at the expense of leaving behind those who rely on transit. What that principle would mean in actual practice we’ll have to work out.

Will you get involved in zoning and land use or remain focused on transit funding?

We’d have to; it’s integral to transit. In our internal discussions, we’re leaning towards supporting development without pricing out poor and working people. We won’t necessarily try to stop it; we’ll fight for accessible and low-income housing.We are on the side of bigger and more concentrated populations, but we’d make sure there’s a place for poor and working people.

What kind of tactics and leverage will you apply to leaders to achieve your goals?

We want to build the power of poor and working people that depend on transit.  That requires organizing and fighting in different spheres: social, economic, and political. We need to be organizing in neighborhoods and on the street. We need to be applying whatever economic pressure we can bring to bear as consumers or as workers. Politically, we need to apply pressure for initiatives and pro-transit politicians. The important thing is mobilizing pressure from below, forcing politicians to become more progressive. We’re focusing on organizing bus riders and building up lines of communication that represents their interests in an organized way.

Do you have plans to support full-time staff?

We don’t have an official plan, but what we’d like to do is have a membership organization with dues, just like a labor union. But until we can actually achieve that, we’re all-volunteer.

One of our principles is independence from existing governments, unions, businesses, etc. To me, the key is to solicit contributions from transit riders.

The vibe I get from TCC’s membership is upscale and insider-y. And that’s great; it’s often the vehicle to get things done. I think the TRU is targeting the opposite demographic, seeking to organize lower-income people for mass action.