Often state and local governments borrow money for capital projects when the economy is good and there is plenty of money for debt service. But when the economy crashes, officials get timid about debt, tightening the purse strings on new borrowing and spending. The problem with that is that economic downturns are the best time to borrow and spend on capital projects because they create jobs. A new set of recommendations from the Washington Commission on State Debt would take a step toward addressing a structural problem in the state’s constitution that makes it harder to borrow for job creating projects when times are tough.

First, a bit of background on how we do debt in Washington. In the first place, almost everyone in politics is paranoid about too much debt. Remember the big debt ceiling debacle over the summer in Washington DC? Politicians respond to the word debt because they think of public debt like a huge credit card that the government uses irresponsibly. Republicans and the press have made debt bashing de rigueur for politicians at all levels, and now even Democrats parrot the government-as-shopaholic meme.

But the truth is that debt is an important tool to get big things done. Virtually every big capital project in the private sector relies heavily on borrowed money. And if you have a mortgage, college loans, or even short-term credit card debt you’ll understand that using credit can be an important way to achieve an otherwise impossible end. The same is true for state and local governments. Debt allows cities, counties, and transit agencies access to cash now to create improvements that will generate benefits to tax payers over time. More after the jump.

Our Constitution has enshrined debt limits at the state and local level mainly because of the fear of government going wild with its ability to borrow. Without debt limits, the cupidity of local politicians pander for reelection would allow them to run up all kinds of debt that we couldn’t pay off.

To prevent that, Article 8, section 1 of the Washington State Constitution limits annual debt service payments, both principal and interest payments, to nine percent of the average of the previous three years of general state revenues. And debt fears mean that legislators have statutorily kept the limit below the Constitutional debt limit.

But think about it for a minute. If the debt service—like monthly credit card or mortgage payments—is tied to revenue, what happens when the economy goes into the tank? 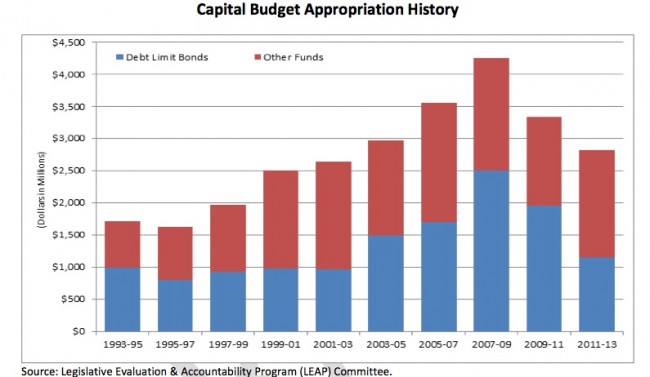 When times are bad, revenues go down, limiting the amount of debt service the state can pay. That means just at the time big spending on infrastructure projects would be helpful to create jobs and spur the economy, the limit kicks in choking off the ability of state government to make prudent investments.

The Commissions recommendations to address this problem are smart and sensible and much needed.

The Commission recommends amending the Constitution to smooth the level of bond capacity over time by 1) calculating average general state revenue over a six year period instead of the existing three year period, 2) adding the state property tax to the definition of general state revenue, and 3) decreasing the debt limit percentage from nine percent to eight and three-quarters percent.

It’s modest but these changes in the way the debt limit is calculated would give the legislature a better footing to borrow for job creating capital improvements. It doesn’t blow the lid off the debt limit, but it makes an adjustment so the limit isn’t so jagged over time. Increasing the number of years from 3 to 6 and factoring in state tax revenue will help.

Lots of important kinds of debt aren’t covered by the state debt limit. Local debt, for example, is tied to a percentage of assessed property evaluation and transportation debt is connected to gas tax revenue. And, generally speaking, revenue bonds are limited only by the revenue use to generate the debt service, like sales or use taxes.

The Commission’s recommendations are, maybe, a first tentative step toward what could be the abolition of debt limits at the state and local level. We don’t need constitutional or statutory debt limits; they tend to be based more on politics than practicality, on fear rather than planning for the future. Infrastructure investments to support Transit Oriented Development would, in the long term, benefit from a loosening and end of debt limits.

The best debt limit we have is the bond market—that is, the people who lend state and local government money. If state and local government manage finances well, lenders and investors will line up to loan us money at reasonable rates. If we do stupid things that crash our economy (like continually failing to pass an income tax) the lenders will increase the interest they charge us or not lend to us at all. The best debt limit is the one that comes from having good credit, which means sensible spending but also fair and progressive revenues.

The Debt Commission will approve the final recommendations this Wednesday, November 30 in Olympia.

26 Replies to “Debt Commission’s Recommendations on the Right Track”