In Seattle we tend to like alliterative self-effacement.  Since we already have the Mercer Mess, let’s talk a little about the Denny Dilemma (disaster? debacle? despair?)  Pick your favorite ‘D’.

The 8 is also one of our least reliable routes, frequently subject to severe delays and bunching, a problem especially severe eastbound in the PM peak. Though Route 8 is a local route its reliability problems are almost entirely due to I-5.  I-5’s construction cut off Capitol Hill from Cascade and Uptown, funneling all traffic onto Denny, whereas in the downtown core the grid was better preserved via Madison, Seneca, Pike, Pine, and Olive.  If topography and local access problems weren’t enough, the only ramp onto I-5 southbound between Mercer St and Spring St is at Yale Ave, a two-block length section of street that serves exclusively to queue cars seeking to get from Denny to I-5 southbound.  Backups routinely stretch over a mile, all the way back to Seattle Center.  Eastbound #8s that depart their Lower Queen Anne terminus on time can be up to 30 minutes late reaching Capitol Hill, just over a mile east!

In an era of austerity, fixing Route 8 is no easy task. Denny is very narrow – limited to 2 lanes in each direction except for a turning lane at Fairview Ave – and there is very little room to widen it.  HOV/BAT lanes would reduce general-purpose vehicle capacity (slightly more than) 50%, and they would do little for transit anyway as eastbound Route 8 must stay in the I-5 access lane in order to serve its stops at Dexter, Westlake, Fairview, and Stewart.   So what can we do with a severe problem and very little money to fix it?

A simple and cheap idea after the jump…

I’ve included a map to help visualize how this might work:

Drivers that currently queue in a single lane on Denny would instead distribute themselves in 3 directions to access I-5 at Howell/Yale, effectively ramp metering their access while keeping them a bit more out of the way of local Denny traffic.  An eastbound Route 8 would serve the near-side stop at Westlake/Denny, immediately move to the left-hand lane, bypass remaining I-5 traffic, and pull back into the right hand lane to serve the pedestrian mini-plaza at Denny/Stewart. 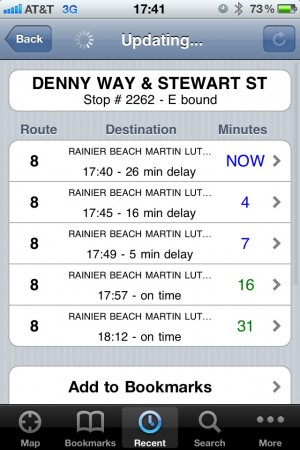 Drawbacks?  In addition to remaining congestion betweeen Queen Anne Ave and Westlake, the absence of a fully-modeled operational analysis limits my ability to predict traffic impacts on Howell.  Some diversion to Mercer could be expected, but we must assume that I-5 demand will not diminish significantly.  Effective signalization could prevent excessive merging-related problems on Howell and keep transit moving.

I don’t pretend that these changes would fix Denny, but I do think the idea is worthy of full study.  I have little doubt that transit would benefit greatly from changes like this.

43 Replies to “The Denny Dilemma”