The First Hill Streetcar will be built.  Its alignment has been approved by the City Council, the interlocal agreement between Sound Transit and Seattle is secure, and construction begins next month. I’m personally quite excited to ride it from Capitol Hill to Little Saigon/Chinatown to get cheaper produce than I can get at QFC.

But let’s be clear, the First Hill Streetcar is an expensive investment (transit planning as consolation prize) that will do very little for mobility in central Seattle.  In its current configuration – and in the absence of money to connect the line through downtown – much more mobility could be purchased through trolleybus investment.  As a staunch rail advocate this is a difficult thing for me to say, but comparing modal choice across origin-destination pairs makes it abundantly clear that the streetcar loses in most cases to existing bus service.

Let me unpack this a bit…more after the jump.

The streetcar will do its only good work facilitating intra-local trips on Broadway.  The streetcar will provide meaningful new connectivity between Capitol Hill Station and Pike/Pine, Seattle U, Swedish, the new Yesler Terrace, and Little Saigon.  The 9 is too infrequent, and the 60 too circuitous, to provide good service between these points.

Beyond Broadway, the streetcar is an expensive disappointment.  Its routing will be circuitous, it will be slow, and it will redundantly waste its highest demand corridor (Jackson St).  Because on Jackson the streetcar will be a center platform while buses (7/14S/36) remain on the side, riders will be forced to make a modal choice between bus and streetcar before either arrive, and given that buses will both enter downtown and have shorter combined headways, most riders on Jackson will remain on the bus. (As far as I know, fully detailed ridership projections for the FHSC haven’t been done, especially modal comparisons.)

In addition, a Pioneer Square terminus severely reduces the ability to connect the SLU and First Hill segments, precluding the 4th/5th connector and requiring an even more circuitous 1st Ave alignment.

Imagine yourself in a few years as a resident of the new Yesler Terrace wanting to get to SeaTac Airport.  From Broadway/Yesler, you have the choice of walking/busing 6 blocks down a steep hill to Pioneer Square Station, or taking the First Hill Streetcar 16 blocks to get to International District Station.  For spatial navigators like myself, the idea of going the wrong direction and backtracking is anathema. Rail bias has its limits!

Look at this map of the streetcar against local bus service (as currently planned in the Oct 2012 service change): at no point on the line is the streetcar a better choice for downtown trips, and at no point is the Yesler-Jackson segment an improvement in either headway or travel time. 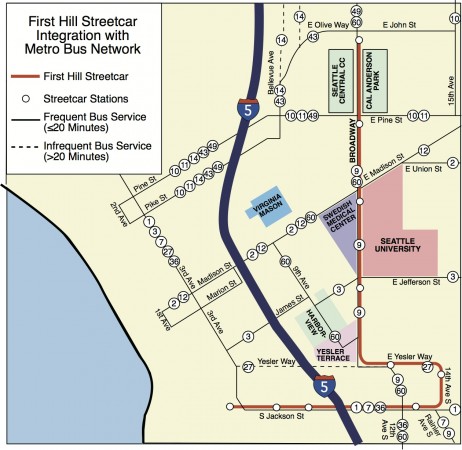 Despite the streetcar connection to the King Street/IDS Hub, the streetcar will do little to reduce demand for peak-only services to First Hill, even when such services are currently a tangled mess  (see map below). With the possible exception of Route 211 (Issaquah to First Hill via King Street Station), the streetcar cannot compensate for any of the existing routes, being too far from Virginia Mason and Harborview to render those services (64, 193, 205, 265, 303, 309) redundant. 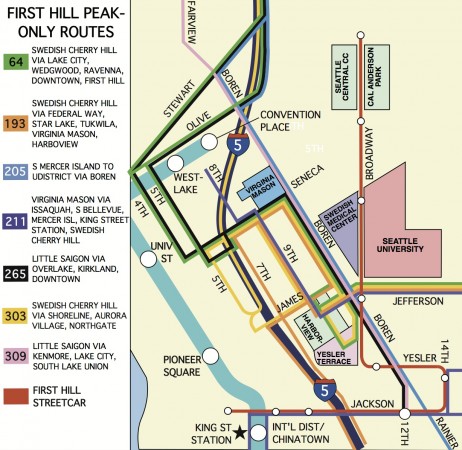 At this point not much can be done, and in any case the point of the streetcar was not to facilitate downtown-First Hill trips, but rather to connect the forsaken First Hill Station to Link.  Even so, the Yesler-Jackson alignment is a disaster, and the Pioneer Square terminus commits us to a future incompatible with the 4th/5th connector.  In the short term, over the next 5-7 years, the network-coherence solution would be to create a Broadway Streetcar:  build the Aloha extension first and scrap the Jackson segment until we secure funding to connect through downtown.  In the meantime, we’ll have a highly visible, mostly redundant streetcar that provides cover for those who cry boondoggle.

158 Replies to “Who Will Ride the First Hill Streetcar?”