The Fall 2012 Service Change does many good things, which Bruce has covered in exhaustive detail. But I wanted to draw particular attention to the effects of the proposed service changes on the Central District. Though I support the changes to Route 2 (and as a former Madrona resident I have credibility on the issue), and though I have long supported the elimination of Route 4, the newest service change proposals radically underserve the commercial hub of the Central District at 23rd/Jackson.

In short,  with the reduced peak frequency on the 14S and the (overdue) elimination of Route 4, riders on Jackson east of 14th will have only half-hourly service to both the International District and downtown. Furthermore, by moving the 27 to Spring/Seneca, the 14 will become the only decent east-west grid connection between Jefferson (Route 3) and I-90.   I drew up a quick map to visualize the changes:

On the map, line widths are indexed exactly with frequency. You can see wonderfully frequent service on Jackson from 5th to 14th Ave, and frequent north-south service on routes 48 and 8, but also an inexplicable east-west frequency gap between 12th and 23rd.  Consulting Bruce’s ridership charts proves that ridership is very strong all the way to 23rd Avenue, and that CD to ID connectivity is important in its own right, independent of trips to downtown proper. Furthermore, the new through route of Route 14S and Route 1 means that trolleys will be lazily looping around Kinnear and West Queen Anne when they should be providing frequent turnback service on the 14S (though, alas, there is no turnback wire on Jackson). 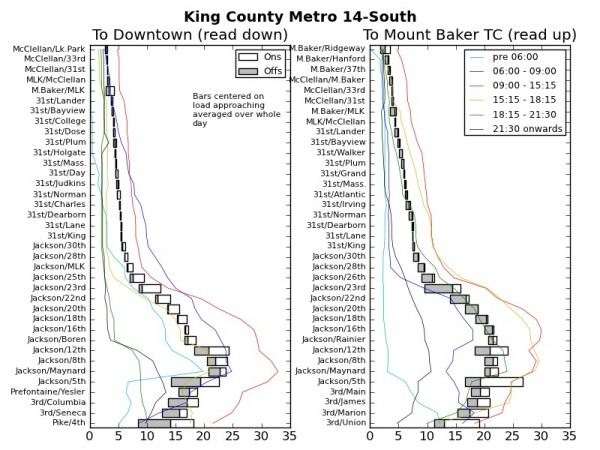 One possible solution:  If the Route 1 loop goes forward, we should ask Metro to offer additional short-turn frequencies between downtown and Jackson/MLK on diesel coaches.  30-minute headways are sufficient for both Kinnear/W Queen Anne and 31st/Mount Baker, but Jackson shouldn’t suffer because of the weakness of Route 14’s endpoints.