I’ve always been drawn to geopolitical oddities.  Humans frequently draw straight, arbitrary lines and the terrain makes a mockery of it, such as Minnesota’s Northwest Angle or the Kentucky Bend.  Other examples, such as the bizarre Dutch town of Baarle-Nassau, are so anachronistic that you can almost imagine medieval barons drunkenly gambling away their various land holdings parcel by parcel.

Washington is home to one of the stranger examples in the United States, Point Roberts, a ‘practical exclave’ on the tip of the Tsawwassen Peninsula just south of the Vancouver suburb of Delta.  Jutting just past the 49th parallel makes it part of the United States, one of (I believe) only two settlements in the western U.S. accessible by land only via Canada (the other is the tiny hamlet of Hyder, Alaska).

Point Roberts also makes a great day trip or short overnight visit, and it’s easily accessible via transit.  When I lived in Vancouver BC I visited twice, each time spending a lazy half-day circumnavigating the peninsula on foot.

The easiest way to get to Point Roberts car-free from Seattle is as follows: 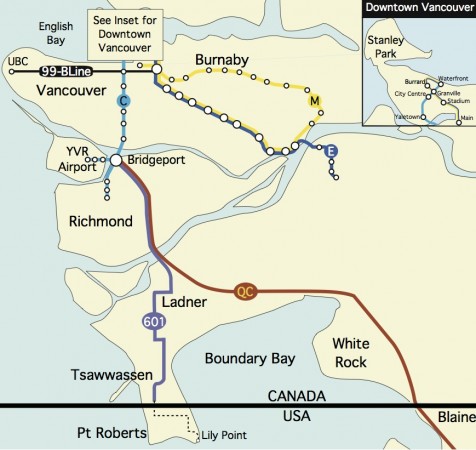 The transit connections are easy.  TransLink #601 runs every half hour 7 days per week until 10pm, and the border crossing is open 24/7/365.  Anchoring your trip at Bridgeport Station also gives you the option to explore Vancouver’s rail transit with ease.  Taking Amtrak Cascades is also possible for longer stays but will take roughly twice as long and require three transfers to reach Point Roberts (Amtrak–>SkyTrain–>Canada Line–>601).

Land use here is very similar to the San Juan Islands;  thick (and brushy) second-growth forests, pockets of old growth, quiet and narrow roads, scattered homes of widely varying quality, a small grocery store, and a high-end marina on the southwestern tip.  A leisurely 3-mile walk will bring you to the steep cliffs of Lily Point, where on clear days you will have expansive views of Boundary Bay and Mt Baker.  Hike down from the bluff to the beach at low tide and you may spot Purple Sea Stars, and you’ll have a chance to see the pilings remaining in the beach from the old Alaska Packers Cannery.  By no means a wilderness adventure, Point Roberts is merely a chance see American gas priced in litres, to set foot in an accident of geography, to pass through a comically excessive border patrol checkpoint, and to walk a few miles on quiet roads for the sheer pleasure of it.