On Monday, Sound Transit substantially completed the rail bridge over Pacific Avenue in Tacoma, marking a major milestone on the ‘D-to-M Street’ portion of the Sounder to Lakewood Extension Project. Pacific Avenue reopened to vehicle and transit traffic as well – nearly 2 months ahead of schedule – modifying detours on Pierce Transit Routes 1 and 53. Remaining work at the site involves the laying of track, berm construction, construction of a pedestrian underpass on A Street, signal and safety installations, etc.

In October the single-track bridge will serve 5 daily Sounder roundtrips to/from South Tacoma and Lakewood. The other 4 daily round-trips (2 peak, 2 reverse peak) will continue to originate/terminate at Tacoma’s Freighthouse Square. 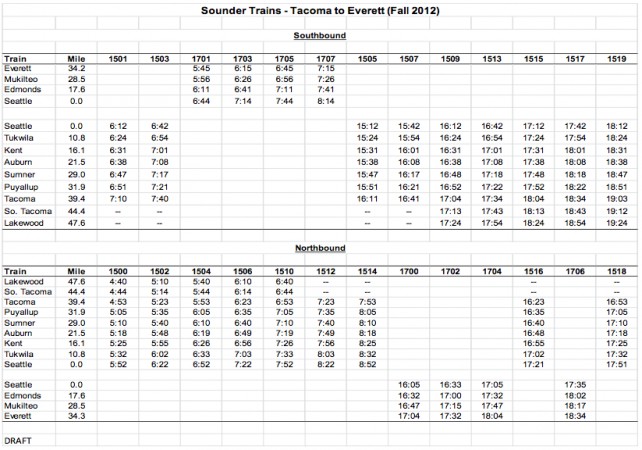 In accordance with the 2012 Service Implementation Plan, Sound Transit will reconfigure its Pierce County services once Sounder service begins. Route 592 will be cut back to 15-minute headways but all trips will begin at DuPont, whereas currently only 1/3 do. Route 592 will also be rerouted off the SODO busway in favor of the Seneca/Edgar Martinez couplet taken by the 577/578. Route 593 will be eliminated and its service hours added to the 590/594, extending the window in which those routes have frequent service. Though Sound Transit had initially planned to move Route 574’s terminus to Lakewood Sounder Station (instead of the current Lakewood Towne Center), subsequent public comment shelved that plan for now.

This bridge also marks a major milestone for the eventual Point Defiance Bypass, even though they are separate projects with different funding structures. Within 5 years or so Amtrak will begin to use the bridge, shaving 6 minutes off Seattle to Portland trips and significantly improving reliability by reducing conflicts with freight traffic.

More coverage, from the Seattle Times and the Tacoma News Tribune.