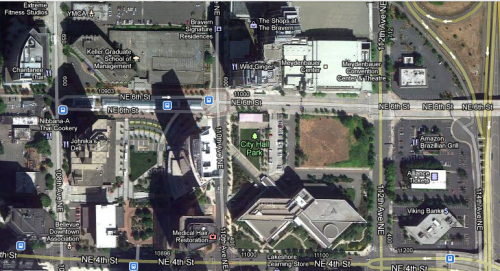 Mike Lindblom has a good scoop about a new design option for Link in Downtown Bellevue. It’s about saving some money.

The boldest new concept would abandon the 2011 proposal to excavate a huge underground station downtown, perhaps 70 feet deep with a mezzanine, beneath the intersection of Northeast Fourth Street and 110th Avenue Northeast. Instead, Sound Transit would look at a shallower Bellevue Transit Center Station for the East Link route.

Builders could exploit the slope that descends from the financial district to Interstate 405 — where tracks are supposed to emerge from the tunnel anyway, then become elevated near Meydenbauer Center. One layout involves a so-called “diagonal” station that cuts the corner where there’s now a City Hall parking garage and vacant King County land. The second concept is oriented east-west along Northeast Sixth Street.

Engineers are also looking at ways to save money at the 110th Avenue Northeast location by making the station shallower or narrower.

If you’re a bit confused, the article has a useful diagram.

I have mixed feelings about this concept. First of all, broadly speaking I’m not a fan of ST’s station designs, or the DSTT stations they inherited.  I have significant complaints about 8 of the 13 existing stations*, even only considering things that wouldn’t have taken much money to get right. Anything that brings the platform closer to the surface makes the train that much closer to everything in every direction, simultaneously. That it saves money is gravy, so three cheers for shallower stations.

Moving it a half-block or block eastward, however, starts to move it further away from the downtown core that it already skirts the edge of, and towards the interstate that we know is the death of walksheds. Here’s hoping that they make it shallower, but keep it as far west as possible.

* In case you’re wondering, I have no major problem with Chinatown, Beacon Hill, Columbia City, Othello, and Seatac. The rest have significant usability flaws.

110 Replies to “A Shallower Bellevue Station”