Via John Niles, a map of vehicle registrations of cars parked in the Tukwila/International Blvd lot: 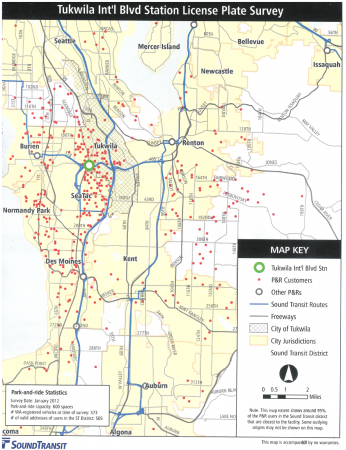 Sound Transit confirmed that it took this data on a single day — January 10th — sometime between 9am and 3pm.

I find the distribution of this somewhat surprising. Beyond the outliers (Mercer Island?) that are presumably using this as airport parking, it’s revealing to see the large numbers coming over from Renton and Kent, site of Sounder service that is in many ways superior. Is this an artifact of parking shortages at Sounder, or of the advantages of Link over Sounder in terms of span of service, frequency, and destinations?